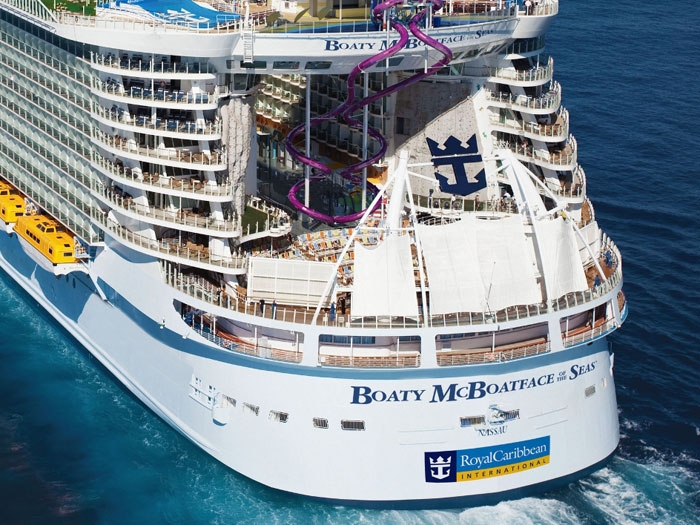 Royal Caribbean's newest and biggest ship yet, Harmony of the Seas, is imagined as Boaty McBoatface of the Seas

APRIL 1, 2016 — Since the first time humans took to the seas, says cruise line Royal Caribbean, choosing a ship’s name has been the most integral part of launching a new vessel. From Christopher Columbus’ Santa Maria, to Captain Cook’s Endeavor, to the legendary Norse longship Skíðblaðnir, a ship’s name establishes its lofty purpose.

The name was submitted as part of the U.K.’s Natural Environment Research Council’s contest to name its newest $300 million Antarctic survey vessel. Regardless of the outcome of that contest, which ends April 16, Royal Caribbean says that it knows that James Hand has forever altered the business of naming ships, and perhaps could make a career out of it.

“Therefore, Royal Caribbean is thrilled to extend James Hand an offer to bring his talents on deck, and help Royal Caribbean develop the name for a future ship,” says the cruise line.  “With five ships debuting in the next three years, Hand’s clever copywriting skills will surely be put to good use.”

The cruise line has invited U.K.-based Mr. Hand to sail on its newest and biggest ship yet, Harmony of the Seaswhen she launches in Southampton, U.K. this May. In return, Mr. Hand will meet with the cruise line’s very own ship naming experts to discuss potential names for a forthcoming ship.

“The people of the United Kingdom know the name of a great ship when they see it,” said Michael Bayley, President and CEO, Royal Caribbean International. “Like the rest of the world, we fell in love with the name Boaty McBoatface when we heard it, and we knew immediately that Royal Caribbean could use James Hand’s talent to name our next ship.”

“If James accepts our offer, who knows, perhaps he could name all our future ships,” added Mr. Bayley. “James Hand, Chief Naming Officer, Royal Caribbean International. It has a nice ring to it.”

O.K., so this story from Royal Caribbean is datelined April 1, but let’s hope Mr. Hand at least gets his free cruise.