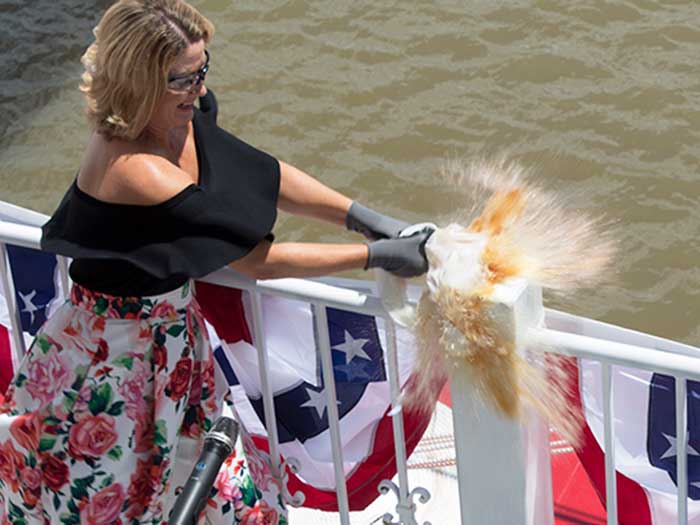 The vessel is based on the former Bettendorf Capri casino boat, originally delivered by Bender Shipbuilding and Repair in 1995, and has emerged from an extensive rebuild at Bollinger Shipyards, Morgan City, LA as a luxurious river cruise ship featuring a generous space ratio showcased by three 550 sq. ft owner’s suites, four 550 sq. ft loft suites, a U.S. riverboat first; and spacious veranda suites with sliding glass doors to private balconies and interior suites.

The new vessel incorporates the high standards of service, entertainment and shore excursions that customers have come to expect from the American Queen Steamboat Company.

Featuring open seating with two dining venues, The Grand Dining Room and The River Club and Terrace, offering regionally inspired cuisine similar to that of the company’s American Queen.

“I could not be more appreciative of all the hard work from every person involved in making the American Duchess dream come true; it’s times like these that I am reminded just how incredible this team and family is,” said Mr. Waggoner. “Thank you for being here to witness this special celebration with our entire crew and myself. We are thrilled to welcome the American Duchess to our fleet.”

“The American Duchess is a culmination of our company’s core values and finest attributes, poised to deliver our trademark level of gracious service, first-class entertainment, superlative fine dining and award-winning shore excursions,” said American Queen Steamboat Company President and COO Ted Sykes. “With the first Loft Suites on U.S. rivers, she is an innovation that will no doubt set new standards for excellence within the industry.”

After the christening, the American Duchess departed New Orleans on her 23 day maiden voyage up the Mississippi River with stops in Natchez, MS, Vicksburg, MS, Memphis, TN, Paducah, KY, St. Louis, MO, and other ports before arriving in her disembarkation city of Red Wing, MN, near the northern terminus of the river.