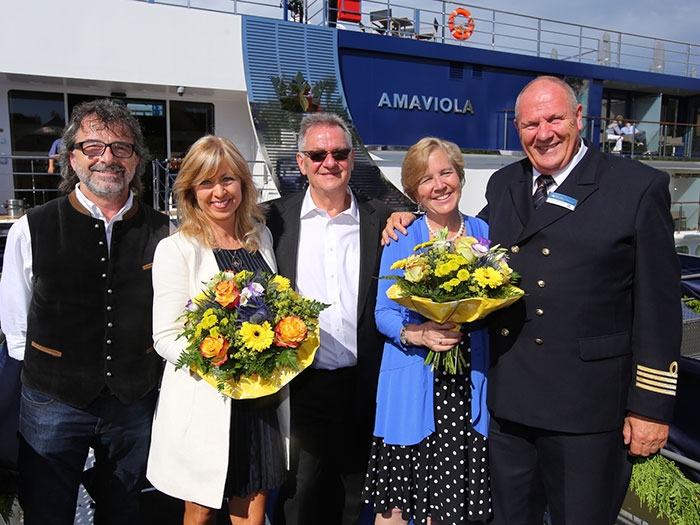 JUNE 20, 2016 — European river cruise specialist AmaWaterways has christened its two newest ships, AmaViola and AmaStella. Both vessels were built by Vahali at its Zasavica, Serbia, shipyard.

The line’s cofounders, Rudi Schreiner and Kristin Karst, were joined by the ships’ godmothers and local dignitaries, for ceremonies in Vilshofen, Germany.

On June 15, AmaWaterways marked the official arrival of AmaViola, with a day of specially planned festivities in Vilshofen. The morning began with the decorating of the dock and continued with comments by AmaWaterways’ Co-Founder Rudi Schreiner and Vilshofen Mayor Florian Gams.

During the festivities, AmaWaterways welcomed Nexion President Jackie Friedman as the ship’s godmother.

Friedman – who joined the Nexion leadership team in 2004 and currently supports more than 3,300 independent leisure and corporate travel professionals – took part in a traditional champagne christening and blessing.

Both christenings were enjoyed by guests onboard and local dignitaries, culminating with unforgettable evening fireworks.

“This is an exciting time for AmaWaterways and we are so thrilled to welcome the beautiful new AmaViola and AmaStella to our expanding worldwide fleet,” said Karst. “AmaWaterways takes great joy in preparing for our christening ceremonies and this year, we are honored to have Nexion’s Jackie Friedman and Virtuoso’s Carole Smethurst join an esteemed list of AmaWaterways godmothers.”

AmaViola began sailing in April and will also be offering 7-night Danube cruises in 2016 and 2017.