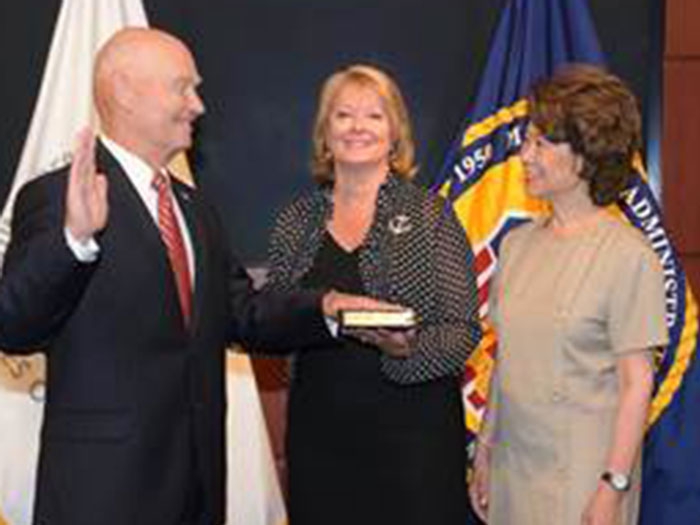 Prior to his appointment, Admiral Buzby served as president of the National Defense Transportation Association (NDTA), a global association of transportation and logistics professionals.

As Maritime Administrator, Buzby will lead an agency tasked with promoting the use of waterborne transportation and its seamless integration with other segments of the transportation system; and the development and maintenance of an adequate, well-balanced U.S. merchant marine, sufficient to carry a substantial portion of the nation’s waterborne commerce, and capable of service in time of war or national emergency. Its shipbuilding responsibilities include administering the Title XI and small shipyards grants programs.

He is also a graduate of the Joint Forces Staff College and holds master’s degrees from the U.S. Naval War College and Salve Regina University in Strategic Studies and International Relations respectively.

“I grew up on the water, piloting vessels from the time I was nine years old, and have a lifelong love for the sea,” Admiral Buzby said. “It is one of the great honors of my life to serve as Maritime Administrator, and to start working to grow and revitalize the U.S. Merchant Marine, and ensure our continues its maritime leadership.”

A career Naval officer with over 34 years of service, Buzby has an extensive background in maritime transportation and leadership, having served on the staffs of the Sixth Fleet, the U.S. Fleet Forces Command, the Navy staff, and the Joint Staff. Prior to his retirement from the U.S. Navy in 2013, Buzby served as the Commander of the Military Sealift Command (MSC) from October 2009 to March 2013. MSC is the provider of ocean transportation for the Department of Defense – operating approximately 120 ships daily around the globe.