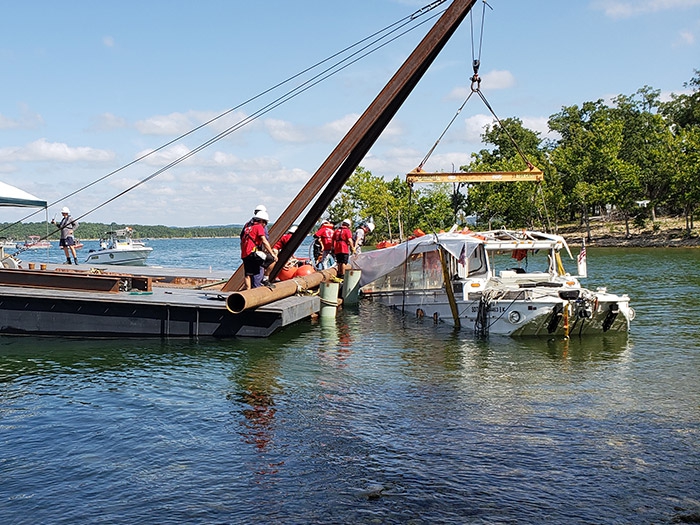 The Coast Guard oversees the removal of Stretch Duck 7 from Table Rock Lake in Branson, Missouri, July 23, 2018. Missouri State Highway Patrol divers rigged the vessel, then a barge crane lifted it to the surface before it was towed to shore and loaded onto a flatbed trailer for transport to a secure facility

JULY 25, 2018 – The duck boat accident that claimed 17 lives when a Ride the Ducks Branson vessel sank in Table Rock Lake in Stone County near Branson, MO, June 19, is far from being the first such incident involving the refurbished World War II DUKWs.

There are horrifying parallels between the Table Rock Lake disaster and earlier duck boat tragedies — notably including the May 1999 sinking of a duck boat in Arkansas that cost 13 lives.

You can download the NTSB report on that accident HERE.

Its multiple recommendations appear to have been ignored.

Information on the duck boat that sank last week — Stretch Duck 07 — retrieved from the Coast Guard’s Port State Information Exchange indicates that the vessel, which was built in 1944, was issued a certificate of inspection by the Coast Guard in February 2017 valid through February 2022. It is hard to see how it could have been granted such a certificate had all the NTSB recommendations on the 1999 incident been put into force — one notable example being “removal of canopies for waterborne operations or installation of a Coast Guard-approved canopy that does not restrict either horizontal or vertical escape by passengers in the event of sinking.”

A finding in the May 1999 incident was that “contributing to the high loss of life was a continuous canopy roof that entrapped passengers within the sinking vehicle.”

A photograph of Stretch Duck 07 released by the Coast Guard after recovery of the vessel showed that it still had such a canopy even after being submerged.

Someone who wants to make sure that the Stretch Duck 07 tragedy is not repeated is U.S. Senator Claire McCaskill (D-MO). She will introduce legislation requiring past recommendations made by NTSB to increase safety of amphibious vehicles like duck boats to be put into law.

“We’ve had more than 40 deaths associated with duck boats since 1999, yet there has been little done to address the inherent dangers of these amphibious vehicles,” McCaskill said. “The NTSB recommendations following the 1999 incident in Arkansas were pretty straightforward, but unfortunately nothing happened. So I’m in the early stages of drafting legislation, with input from NTSB and the Coast Guard, to require that the design issues with amphibious passenger vessels be addressed—and that boats that are not compliant be taken out of service until they can be compliant. These recommendations are reasonable and commonsense.”

McCaskill noted that the full investigation of the incident at Table Rock is expected to take a year or longer, but that Congress shouldn’t wait when there are steps that can be taken now based on past recommendations.

McCaskill intends to introduce legislation that would put into law the recommendations made following the 1999 accident in Arkansas.