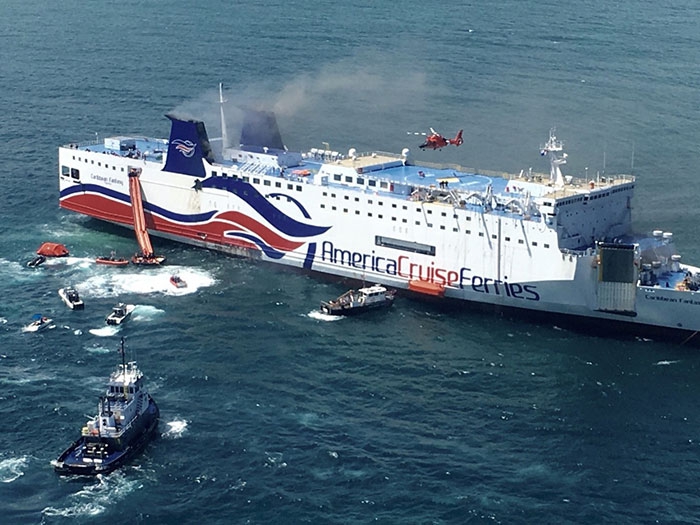 Aerial photo of the Caribbean Fantasy's starboard side during the final stage of abandonment, with its starboard anchor down

JUNE 6, 2018 — The National Transportation Safety Board determines that the probable cause of the August 17, 2016, fire aboard the roll-on/roll-off passenger vessel Caribbean Fantasy was vessel owner Baja Ferries’ poor safety culture and ineffective implementation of its safety management system on board the vessel, where poor maintenance practices led to an uncontained fuel spray from a blank flange at the end of the port main engine fuel supply line onto the hot exhaust manifold of the engine.

Contributing to the rapid spread of the fire were fuel and lube oil quick closing valves that were intentionally blocked open, fixed firefighting systems that were ineffective, and a structural fire boundary that failed.

Contributing to the fire and the prolonged abandonment effort was the failure of the Panama Maritime Authority and the recognized organization, RINA Services, to ensure Baja Ferries’ safety management system was functional.

As a result of the investigation the NTSB issued safety recommendations to the to the U.S. Coast Guard, Baja Ferries S.A. de C.V., RINA Services S.p.A, the International Association of Classification Societies, and the Panama Maritime Authority.

“The recommendations that we issued today, if acted upon, will improve marine safety,” said NTSB Chairman Robert L. Sumwalt. “I urge the recipients to act on these recommendations, so that this fortunately non-fatal fire is not remembered as the dress rehearsal for a future tragedy.”

The fire began in the main engine room of the 614-foot long, Panamanian-flagged vessel, when fuel spraying from a leaking flange contacted the hot surface of the port main engine. The fire could not be contained, and the master ordered abandon ship. The fire burned for three days while the vessel, used for ferry service between Santo Domingo, Dominican Republic, and San Juan and Mayaguez, Puerto Rico, drifted and subsequently grounded near the port of San Juan. The fire was extinguished by shore-based firefighters after the Caribbean Fantasy was towed into the harbor.

More than 45 of the 511 passengers and crew aboard were treated for non-life-threatening injuries including knee, ankle and leg injuries, fainting, breathing difficulties and other issues. Only six injuries – ankle injuries incurred while sliding down the marine evacuation system – were considered serious. The accident resulted in an estimated $20 million in damage and the Caribbean Fantasy was eventually scrapped in lieu of repairs.

The synopsis, findings and all recommendations related to the accident are available online at https://goo.gl/4azkER

The full report will be available in a few weeks at ntsb.gov.