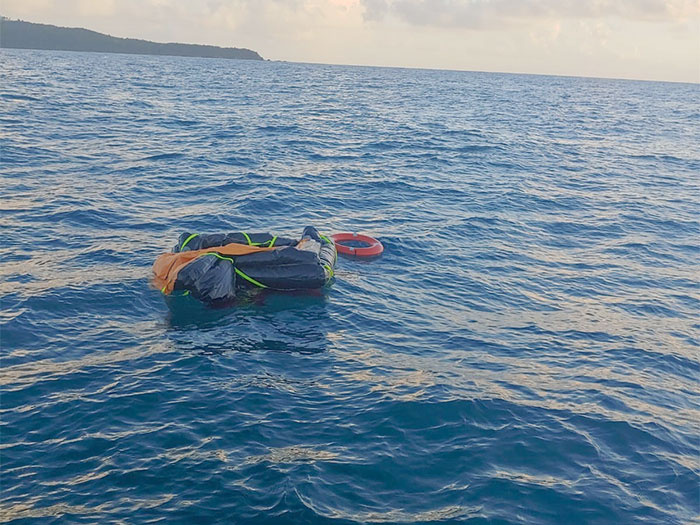 The captain of the towing vessel Proassist III decided it was better to stay on the vessel to await rescue rather than use its only liferaft. [USCG photograph]

Unsecured openings in the deck of a towing vessel led to its flooding and sinking off the coast of Puerto Rico, the National Transportation Safety Board says.

Marine Investigation Report 22/12 details the NTSB’s investigation​ into the December 24, 2020, flooding and sinking of the 1949-built towing vessel Proassist III near Puerto Yabucoa, Puerto Rico. The towing vessel was transiting northbound off the coast of Puerto Rico when its stern compartments began flooding. The three crewmembers on board were unable to pump out the water and eventually abandoned the vessel. No injuries were reported. The vessel was declared a total loss at $968,000.

​​Shortly after departing Laguna de las Mareas, Guayama, the Proassist III encountered worsening weather conditions and seas began washing on deck. More than two hours after their departure, the crew noticed the vessel was down by the stern and found about three feet of water in the flanking rudder compartment. Roughly 40 minutes after the crew discovered the water and attempted to pump it off, the flanking rudder and steering rudder compartments were filled with water. A post loss examination of the vessel showed openings in the vessel’s watertight bulkheads and a lack of gaskets and securing mechanisms for flush hatches and door openings on the deck.

NTSB investigators did not find any hull structural defects that could have allowed for the significant flooding and concluded a cover for an aft deck opening must not have been in place. Recently implemented regulations for towing vessels required all openings to be secured when operating offshore. The regulations also require maintaining the watertight and structural integrity of the vessel. However, deficiencies found in the post loss examination of the Proassist III indicated that the vessel was not adequately maintained. The U.S. Coast Guard’s Concentrated Inspection Campaign found three other vessels owned by the Proassist III owner had hull and deck integrity issues, signaling the company did not have an effective maintenance program.

“An effective maintenance and hull inspection program would have proactively sought to minimize the wastage of steel on the Proassist III (and other company vessels) and made any corrosion issues easier to identify and flag for repair,” the report said.

“Over the past five years, the NTSB has investigated five casualties involving towing vessels whose weather decks and openings were in poor condition—leading to flooding and subsequent sinking,” the report said. “To protect vessels and the environment, it is good marine practice for owners to conduct regular oversight and maintenance of hulls, including between drydock periods, regardless of inspection requirements. An effective maintenance and hull inspection program should proactively address potential steel wastage, identify hull and watertight integrity deficiencies, and ensure corrosion issues are repaired in a timely manner by permanent means.”

As ever, the bland NTSB summary of its findings only hints at what’s in the full report. For example, here’s what happened before, “the crew eventually decided to abandon the vessel.”

“The crew prepared to abandon the vessel and donned personal flotation devices,” says the full NTSB report. “The captain and deckhand/engineer threw the vessel’s only liferaft canister into the water and pulled the painter line, which they had tied to one of the bitts. The carbon dioxide cylinder valve opened to inflate the liferaft; however, two straps around the center of the canister did not break, restricting the expansion of the liferaft. Seeing this, the captain went inside the vessel to search for a knife to cut the straps. While searching, he stopped in the engine room to look for evidence of flooding but saw none. In the meantime, the deckhands hauled in the painter line to bring the liferaft alongside the vessel. After finding a knife, the captain jumped into the water, and cut the two straps. After the liferaft inflated, he briefly entered the liferaft before crawling back on board the Proassist III, deciding it was better to be on the vessel to await rescue.”

Subsequently, the crew were rescued by a fishing vessel.

“The 111.3-foot-long towing vessel Proassist III was constructed of welded steel by Nashville Bridge Company in Nashville, Tennessee, in 1949. Originally built as an inland rivers line-haul towboat, the vessel was converted into a harbor tug in 1989. Modifications included rounding and adding sheer to the bow. The Proassist III’s hull was originally constructed with seven compartments separated by bulkheads that were designed to be watertight and had watertight doors. The vessel operated on the Mississippi River until it was purchased by Puerto Rico Operations in 1992. The Proassist III was then operated by American Tugs & Barge (ATI) and homeported in San Juan and then Puerto Yabucoa, Puerto Rico.”

“Before 1992, the Proassist III was 316 gross register tons (GRT) under the
U.S. regulatory measurement system, and, if the vessel was to operate outside of harbors (offshore of the coast of Puerto Rico), it would have been subject to inspection by the Coast Guard as required by the regulations in 46 Code of Federal Regulations 2.01-7. Requirements for an inspected vessel would have included annual examinations and drydocking twice every five years. In 1992, the Proassist III was re-measured; the vessel was determined to be 241 GT ITC under the international convention measurement system and 213 GRT under the U.S. regulatory measurement system. In 1993, the vessel received a new tonnage certificate and was no longer subject to the vessel inspection laws for a seagoing motor vessel of more than 300 GRT.

“Similarly, vessels with a regulatory tonnage of 150 GRT or more are subject to load line regulations and are required to be surveyed annually by surveyors of the load line certificate-issuing authority (the American Bureau of Shipping or another recognized classification society approved by the Coast Guard) and drydocked for survey once every 5 years. When the Proassist III’s regulatory tonnage was over 150 GRT, the vessel was subject to the regulations, including Coast Guard inspections for single-voyage load line exemption certificates (the vessel was issued certificates in 1994, 1995, and 1996 to sail between San Juan and Guayama).

“In December 1996, deep frames (similar to a bulkhead) were added to the vessel in order to reduce the volume of space below the main deck used to calculate the GRT using the regulatory measurement system. This modification further reduced the vessel’s tonnage to 148 GRT (the GT ITC remained the same). In 2000, the owner of the Proassist III informed Coast Guard Sector San Juan that the vessel had reduced its regulatory tonnage to 148 GRT on December 10, 1996, and therefore was no longer subject to load line regulations because it was an existing vessel (now) less than
150 GRT.”

Also making for informative reading in the full report are the owner’s preparations for Subchapter M compliance.