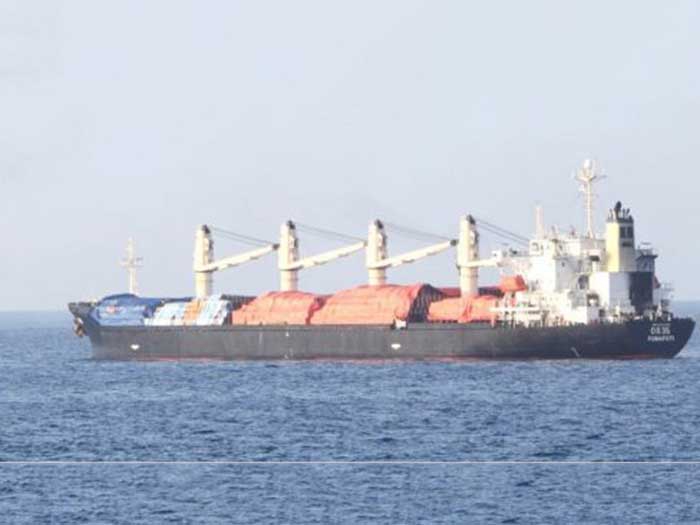 APRIL 10, 2017 — EU Naval Force confirms that cargo ship, MV OS-35, that was attacked by suspected armed pirates on Saturday 8 April, is safe and en route to port after successful cooperation between international counter-piracy naval forces in the Gulf of Aden.

Naval forces became aware of the attack after MV OS-35’s master sent out a mayday alert to say that armed men had climbed on board his ship. The master and crew were able to secure themselves in a safe room, known as a citadel, after stopping the engines.

Upon hearing the alert, EU Naval Force’s Maritime Security Centre (Horn of Africa) immediately issued a navigation warning to all merchant shipping to warn them that a piracy incident had taken place.

Although the EU Navfor statement makes it clear that the ship was rescued by a multinational effort, the Indian media has been upset by a Chinese navy statement to the effect that a “PLA convoy fleet on Sunday local time rescued a Tuvalu-flagged ship hijacked by pirates in the Gulf of Aden, a region in which China has conducted escort missions since 2008. A group of 16 members from the Chinese navy’s special force boarded the hijacked ship and rescued the 19 crew members” making no reference to the part played by the Indian Navy, or anyone else.

There are no reports of any encounters by the special forces with the pirates, who appear to have abandoned the vessel when they found it without power and the crew safely barricaded in the citadel/

The hijacked merchant vessel, OS-35, is operated by Oldstone Management of Lebaon and is a 1999-built, 35,362 dwt bulk carrier that was The ship, known as OS 35, was traveling from Kelang in Malaysia to Aden in Yemen when it came under attack from Somali pirates on Saturday night.