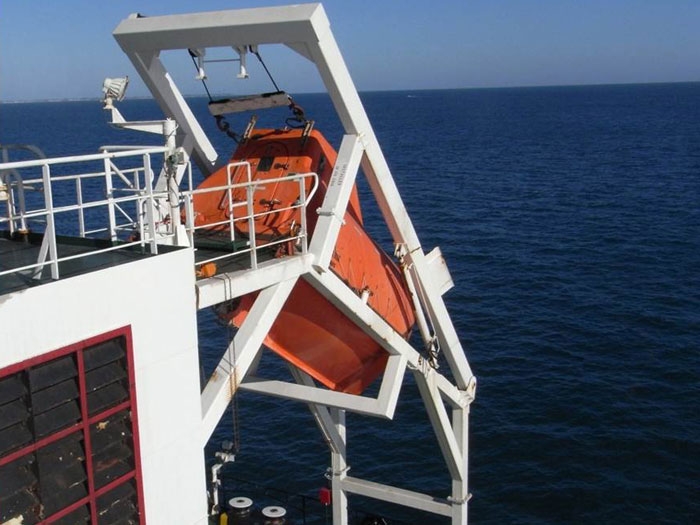 APRIL 2, 2014 – The Australian Transport Safety Bureau has issued a preliminary report on an incident in which a freefall lifeboat was inadvertently released during a preliminary inspection.

It occurred on March 1, 2014, when the 190 m Maltese registered bulk carrier Aquarosa was on a voyage from Singapore to Kwinana, Western Australia.

A ship’s engineer, who was in the lifeboat at the time of its release, sustained serious injuries.

The lifeboat was retrieved on board the ship about five hours after its release and the voyage to Kwinana was resumed.

The ATSB’s initial analysis of the incident indicates that the lifeboat release mechanism was not fully and correctly reset after it was last exercised and that the hook was released when the engineer topped up the release system hydraulic oil reservoir and manually operated the pump to pressurise the system.

Initial analysis also indicates that the two simulation wires, which were designed to hold the lifeboat when the hook was released during a simulated release, failed at a load significantly below their rated safe working load.

On March 17, 2014, the ATSB contacted Aquarosa’s managers, the lifeboat manufacturer, Bureau Veritas, the International Association of Classification Societies, the Malta Merchant Shipping Directorate and the Australian Maritime Safety Authority. These organisations were advised of the incident and the initial findings of the ATSB safety investigation. They were also urged to identify ships fitted with similar freefall lifeboats and to advise operators of those ships to take appropriate safety action to prevent similar accidents from occurring.
Investigation direction

The investigation is ongoing and will focus on determining how the lifeboat release mechanism could be reset incorrectly without an obvious visual indication and why the simulation wires failed.