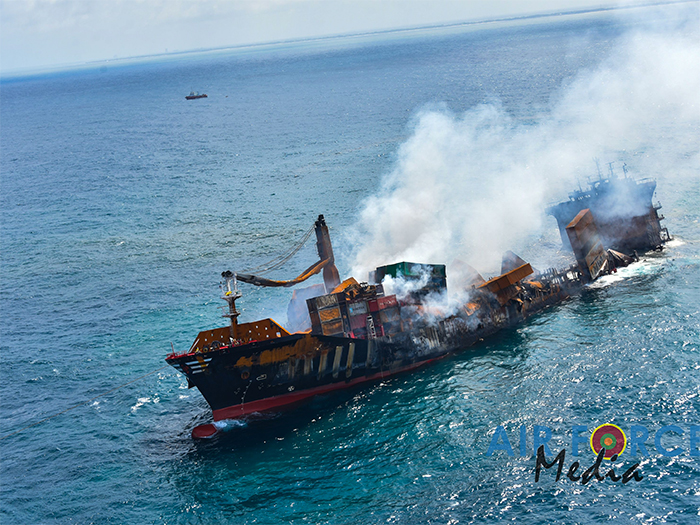 As the smoldering remains of the containership X-Press Pearl settle into the sea, Sri Lanka’s Centre for Environmental Justice, which is associated with Friends of the Earth Sri Lanka, today filed a lawsuit against the Sri Lankan government and the vessel’s operators, reports Channel News Asia.

The lawsuit seeks an unspecified amount in damages as Sri Lanka continues to deal with effects from the incident that include beaches being swamped with tons of microplastic granules and fisheries activities being suspended in large areas. As yet, no fuel oil spill has been reported.

The most recent report from the vessels operator is:

X-Press Feeders, operators of the container ship ITOPF can confirm that the situation on scene remains the same with no signs of debris and no reports of fuel oil pollution as of 1800 Sri Lanka local time.

The ships aft portion remains on the seabed at a depth of about 21 meters, and the forward section continues to settle down slowly. Salvors were able to retrieve the anchor and remain on scene to deal with any possible debris supported by the Sri Lankan Navy and the Indian Coast Guard, who have oil spill response capabilities on standby.

Ashore representatives of ITOPF and Oil Spill Response are monitoring updates from the scene and remain on standby to be deployed in case of any reported spill. They continue to coordinate with MEPA and the Sri Lankan Navy on an established plan to deal with any possible spill of oil and other pollutants.

One seafarer remains in a private hospital recovering from leg injuries sustained in the evacuation from the ship.. A second injured seafarer, who tested Covid positive but remains asymptomatic, is recovering in a military hospital. The rest of the crew remain housed in a quarantine hotel.