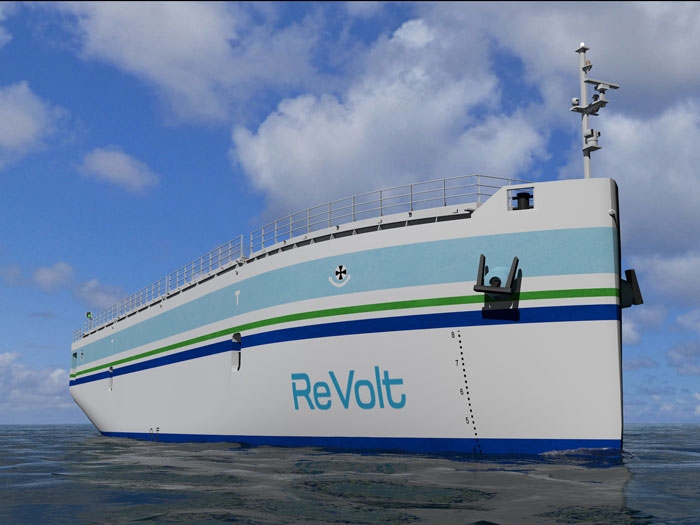 Described as “autonomous, fully battery powered and highly efficient,” ReVolt is powered by a 3,000 kWh battery. This reduces operating costs by minimizing the number of high maintenance parts such as rotational components. The vessel has a range of 100 nautical miles, before the battery needs to be charged. If the energy required for that is harnessed from renewable sources, this would eliminate carbon dioxide emissions.

ReVolt does not require a crew and therefore, says DNV GL, goes a long way in tackling one of the shipping industries’ weakest links: the safety record.

“With an average of 900 fatalities per year the mortality rate in shipping is 90 percent higher than in comparable land-based industries,” DNV GL says. “Studies have shown that the majority of these accidents are caused by human error. Unmanned vessels take this factor out of the equation and make the operation of these ships more cost-efficient.”

The vessel has an average speed of 6 knots and faces less water resistance than other ships, which usually travel at about 8.7 knots. The slight loss of speed allowed the engineers to fit a straight vertical bow, further reducing water resistance along the ship’s entire profile and ultimately saving energy.

With no crew, there is no need for crew facilities such as the superstructure on board this vessel. The resulting increase in loading capacity, as well as low operating and maintenance costs, mean that compared to a diesel-fueled ship ReVolt could save up to $34 million over its estimated 30-year life.

The concept-ship is currently still being tested.

“Building and operating this vessel would be possible with today’s technology. ReVolt is intended to serve as inspiration for equipment makers, ship yards and ship owners to develop new solutions on the path to a safe and sustainable future,” says Hans Anton Tvete, Senior