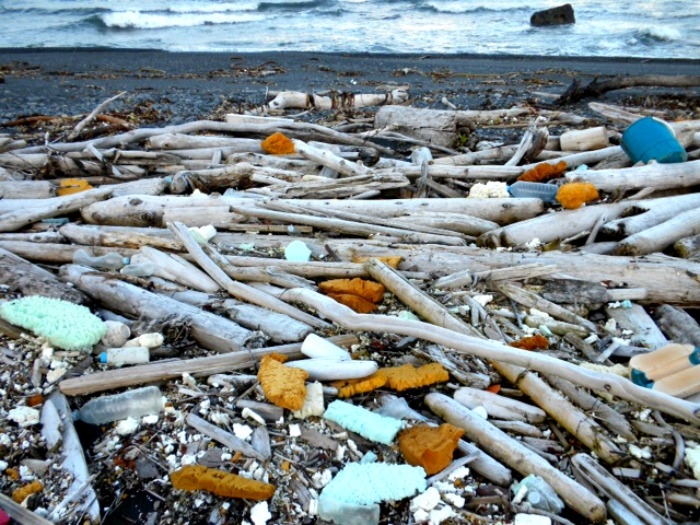 FEBRUARY 18, 2016—The earthquake and tsunami that struck Japan in 2011 killed an estimated 16,000 people, left 230,000 people homeless, and caused $300 billion in damage, according to the Japanese Government. The tsunami also swept an estimated 5 million tons of debris into the Pacific Ocean. While about 70 percent of that debris is estimated to have sunk along the coast of Japan, another 1.5 million tons of debris is being carried across the Pacific Ocean by winds and currents. Tsunami-generated debris began arriving on the shores of the U.S. and Canada n 2011 and is expected to continue for years to come.

The Alaska Department of Environment Conservation (DEC) says that despite the tons of marine debris that have been removed from Alaska shorelines in recent years, large quantities are still accumulating. Polystyrene foam, clearly identifiable as debris from the 2011 tsunami in Japan, continues to be a substantial percentage of the marine debris found in Alaska. Over time, foam litter breaks down into smaller and smaller pieces, falling between cracks in nearly impenetrable log piles along Alaska shorelines. Marine animals, including fish, can easily mistake polystyrene for food, therefore making it critical to remove the debris quickly before it becomes impossible to collect.

The DEC recently received $950,000 from the Government of Japan, through the National Oceanic and Atmospheric Administration (NOAA) Marine Debris Program, for tsunami marine debris collection, removal, and disposal projects. Specifically, this funding is intended to support a single large-scale project this year covering Kayak and Montague Islands, locations that have some of the highest densities of marine debris in the Gulf of Alaska.

Kayak Island and Montague Island are both located in the central Gulf of Alaska and were selected to be the focus of 2016 field operations based on the State’s history of work in these areas and the high density of marine debris that continues to plague these “collector” shorelines, which accumulate large amounts of debris due to local currents and winds. These areas are also extremely difficult to access by traditional means (skiff and landing craft) and lack local disposal options, making it cost prohibitive for existing marine debris organizations to take on removal efforts with smaller funding sources like grants and donations. Similar to the 2015 project, Alaska anticipates the selected contractor will use helicopter support to transfer collected debris from beaches to a barge anchored off shore, which will then travel to a landfill in the Pacific Northwest where this quantity of debris can be accommodated. Because no landfill in Alaska will accept large quantities of marine debris, the debris collected from this project must still be transported by barge to a landfill outside of Alaska, regardless of the method used to initially remove it from Kayak and Montague Islands.

The DEC is expected to issue a Request for Proposals this month for the field work. Any qualified contractor interested in submitting a proposal should monitor the Alaska Online Public Notice website for updates: https://aws.state.ak.us/OnlinePublicNotices/default.aspx.

Since 2012, Alaska has received the majority of the $5 million dollar from the Government of Japan to support the U.S. marine debris cleanup operations in areas affected by tsunami debris. To date, $2.5 million has been used to support aerial surveys and marine debris collection, removal, and disposal projects in priority shoreline segments in the Gulf of Alaska, Southeast Alaska, and the Kodiak Island area. Most recently, in July 2015, a large-scale effort involving state and federal agencies, private industry, and local and international non-profit organizations commenced to remove debris stored in the Kodiak Island area and shorelines in the Gulf of Alaska, Prince William Sound, and British Columbia. The operation lasted three weeks and required 1,176 helicopter trips to sling 3,397 “super sack” loads and 717 consolidated bundles of marine debris from 11 locations onto a 300-foot barge. The debris was then transported to the Lower 48 for disposal. To date, over one million pounds of marine debris have been collected and removed from Alaska using the funds provided by the Government of Japan and administered through DEC.