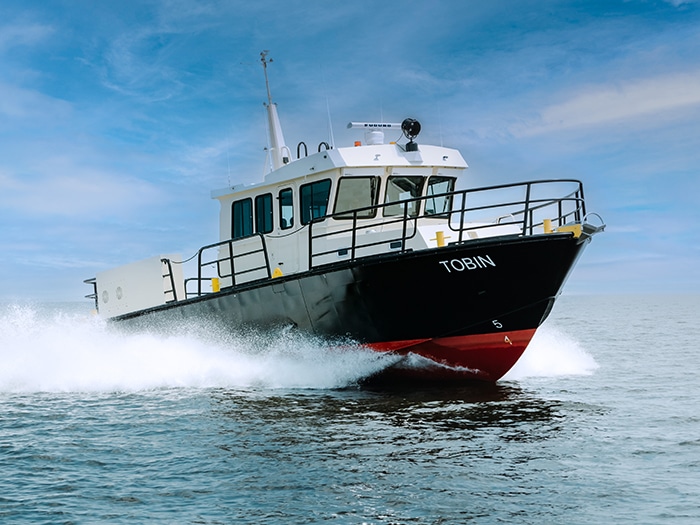 Marking the latest expansion in its Endeavor range of workboats, Theodore, Ala., based Silver Ships Inc. has delivered the Tobin, the largest marine surveying vessel in its series.

The 49-foot vessel has been custom designed for the U.S. Army Corps of Engineers Venice Sub Office in Venice, La., to hydrographically map the mouth of the Mississippi River.

The mission-specific hydrographic survey vessel will allow researchers to accurately and effectively obtain and document data on the rapidly changing waters in the Mississippi River.

With the intent of keeping waterways open and preventing obstructions to marine navigation, Tobin is equipped to handle challenging river terrain and will conduct condition surveys of the river to further the safety of marine operations, says Jason Powers, director of business development for Silver Ships.

The vessel is powered by twin Caterpillar C18 Tier 3 engines, developing 800 hp each to reach optimal speeds resulting in the prevention of research delays, which is important considering the frequent changes in Mississippi River conditions. The single Caterpillar C2.2 Tier 3 genset provides 25 ekW of electric power for Tobin’s air conditioning, echo sounder and other electrical needs onboard.

“Thompson CAT is proud to partner with Silver Ships for their power needs,” says Richard Tremayne, marine business manager at Thompson CAT. “Together our engineering teams have designed and built significant boats like Tobin over many years. High-performance power installations are always fun puzzles to solve with talented companies like the Silver Ships team.”

With speeds that reach 28 knots, the hydrographic survey vessel allows researchers to acquire data quickly and prevent inconsistencies caused by changes in the river bottom. Additionally, Tobin is equipped with state-of-the-art technology that includes an EchoTrac E-20 survey system. They key component that allows the vessel to take survey measurements, the E-20 uses a single- beam transducer that charts river depths and monitors water changes that could be potentially hazardous to marine navigation.

This vessel’s name honors Thomas G. Tobin who worked for the U.S. Army Corps of Engineers New Orleans District for more than 30 years. As a capable engineer and brilliant programmer, Tobin developed systems that automated the processing and mapping of daily navigation condition surveys collected. He was a part of the Engineering Division Channel Improvement team and achieved success with the automated design functions that ensure successful operations of the Mississippi River. Tobin dedicated his skills to the Corps mission and made a broad, lasting, and meaningful impact on the entire district and the citizens of south Louisiana. He passed away in February 2016, at the age of 54, after a courageous battle with cancer.