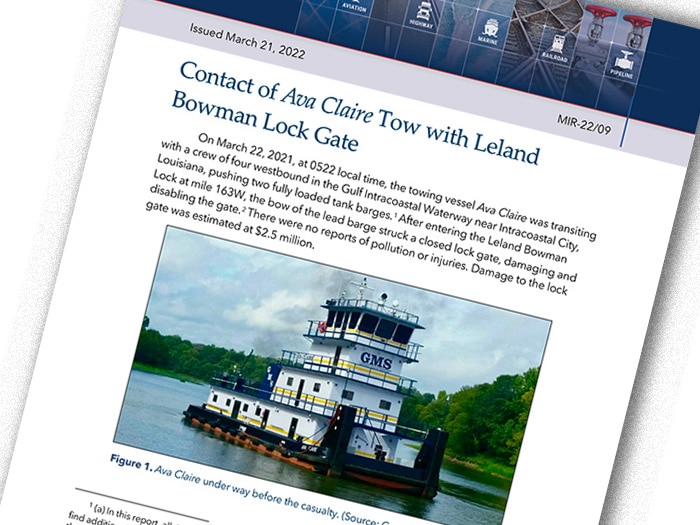 A captain who assumed a watch immediately after waking was likely experiencing sleep inertia, leading to a tow striking a lock gate in the Gulf Intracoastal Waterway, says the National Transportation Safety Board.

On March 22, 2021​​, the towing vessel Ava Claire was transiting westbound pushing two fully loaded tank barges in the Gulf Intracoastal Waterway near Intracoastal City, La. After entering the Leland Bowman Lock, the bow of the lead barge struck a closed lock gate, damaging and disabling the gate. No injuries or pollution were reported. The lock gate sustained $2.5 million in damage.

​On the morning of that day, the captain awoke after 4.5 hours of sleep to assume the watch early from the vessel’s pilot. The pilot offered to take the tow through the Leland Bowman Lock, but the captain declined and took the helm about five minutes before maneuvering the tow into the lock. According to a policy contained in the vessel’s operations manual, a change of watch was not to occur during “a critical move,” such as maneuvering into a lock.

The tow struck the lock gate less than 30 minutes after the captain woke up. At the time, the captain was likely experiencing the effects of sleep inertia—the temporary feeling of grogginess felt immediately upon waking up. According to the report, as the master of the Ava Claire, the captain should have been familiar with the vessel operating policies and procedures and should not have taken the watch. However, his decision to take the watch may have also been the result of impairment caused by sleep inertia.

“Sleep inertia negatively affects an operator’s performance, vigilance, alertness, and decision-making for 30 minutes or more after waking, especially in demanding situations that require high levels of attention and cognitive demand,” notes the NTSB report. “Further, waking during a circadian low and partial sleep deprivation can amplify the effects of sleep inertia. The captain’s sleep inertia, coupled with the challenges presented by the operating environment, would have negatively impacted his ability to safely navigate through the lock.”

Additional factors added to the captain’s challenges as he attempted to maneuver the Ava Claire tow, including a tidal current pushing the tow from astern; loss of the GPS feed to the vessel’s electronic chart system which denied the captain his primary source of speed indication; and problems with radio communications between the deckhand and the captain further impacting his ability to judge speed and distance.

The National Transportation Safety Board determined that the probable cause of the contact of the Ava Claire tow with the Leland Bowman Lock gate was the towing vessel captain’s decision to assume the helm watch and attempt a predawn transit into the lock immediately after awakening while he was likely impaired by sleep inertia.

Sleep inertia is the temporary feeling of grogginess felt immediately upon awakening. Studies have shown that the effects of sleep inertia include reduced alertness, slower reaction time, less accuracy, degraded memory, and impaired decision-making ability. Sleep inertia generally lasts for about 30 minutes after waking but may last longer if a person is sleep deprived. Mariners should allow time to fully recover from sleep inertia before taking a watch and performing critical duties.