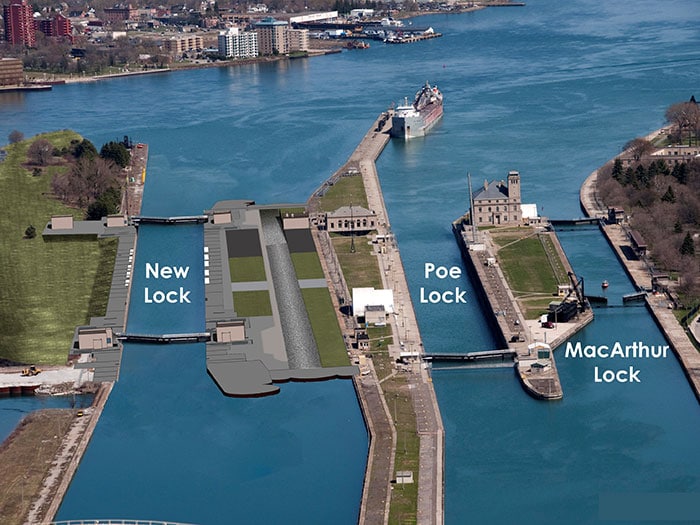 Rendering depicts how the Soo Locks will look once the New Lock at the Soo is complete in Sault Ste. Marie, Mich.

The Detroit District says that the contract allows KAT to start constructing the largest phase of the project, the new lock chamber and rehabilitation of the downstream approach walls. With continued funding, the remaining work, valued at $803.95 million may be awarded over the next three years. Corps of Engineers officials expect Phase 3 construction to take seven years.

With Phase 1 nearly complete and Phase 2 scheduled for completion in summer 2024, the third construction phase is a big milestone for the project. A major cost increase led to a five-month contract award delay while the Corps of Engineers developed necessary reports to deliver a new cost estimate for reauthorization to Congress. The cost increase root causes are changing market conditions, inflation, a nationwide labor shortage, design modifications and early estimate assumptions.

The Soo Locks are situated on the St. Marys River at Sault Ste. Marie, Michigan and allow vessels to transit the 21-foot elevation change at the St. Marys Falls Canal. Over 88 percent of commodity tonnage through the Soo Locks is restricted by vessel size to the Poe Lock. This new lock project will construct a second Poe-sized lock (110 by 1,200 foot) on the existing decommissioned Davis and Sabin locks site.