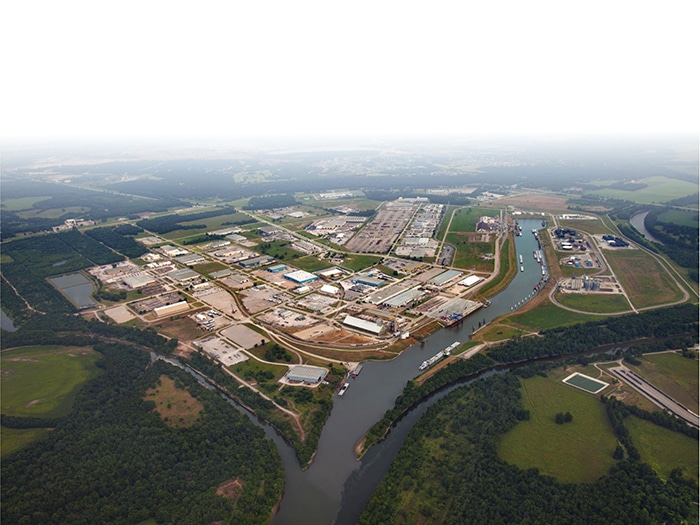 As of late, the nation’s focus has been drawn to freight logistics and containerized shipping. Dewey Bartlett Jr., chairman of the City of Tulsa-Rogers County Port Authority, says that attention is a good thing for inland waterways and both of the Tulsa Ports, which has locations in Catoosa and Inola.

In 2021, the Tulsa Port of Catoosa celebrated its 50th anniversary, as did the McClellan-Kerr Arkansas River Navigation System (MKARNS), the inland waterway that connects Tulsa to the Mississippi River, the Gulf of Mexico, and thereby the world shipping sea lanes. Events and activities occurred throughout last year to highlight and celebrate the port’s 50th birthday. But, if 2021 was a year to reflect on the amazing history of Oklahoma’s maritime shipping industry and the Tulsa Port of Catoosa, 2022 begins an era of engineering the future of goods transportation, industrial development, and other new opportunities.

Near the end of 2019, the port authority acquired 2,200 acres of industrial property just 18 river miles from the Tulsa Port of Catoosa. This historic partnership with Public Service Company of Oklahoma began the groundwork to establish a new industrial site and inland waterway port. The newly christened “Tulsa Port of Inola” offers contiguous land sites of up to 1,500 acres with utility capacities, population proximity, and transportation connections that will support large-scale industrial and economic development projects.

New companies are beginning operations at the port and others are expanding. The port authority remains busy keeping up with the challenges of replacing older roads and infrastructure. Bartlett reports that over $6 million worth of major renovations to roadways and railroads has occurred during the last year or is currently in progress.

“It is one of our goals that the Tulsa Port of Catoosa maintain its reputation as one of the most modern, and best maintained inland ports in the nation, but it takes a lot of continual work and investment,” said Bartlett.

Late last year, the 117th Congress passed the Infrastructure Investment and Jobs Act of 2021 (IIJA) and President Biden signed it into law. “Although the debate surrounding this bill was politically divisive, the passage of the IIJA brings much needed funding for the MKARNS,” said Bartlett. “Over $200 million was allocated for the United States Army Corps of Engineers to perform critical maintenance and repairs to the waterway. This is a monumental win for our system and the states of Oklahoma and Arkansas that directly benefit.”

Not only do these federal investments in the waterway ensure the reliability of navigation on the MKARNS, a system that annually moves 10 to 12 million tons by barge, but they bolster other waterway benefits, including water supply, flood control, hydropower generation, and even recreational activities like fishing and boating.

But Bartlett and the Tulsa Ports believe that one of the biggest developments to come is in containerized freight moving by barges. “It seems that everywhere you look, you see shipping containers moving by train and truck. These containers ship goods across oceans, to and from our coastal ports, and along the highways and railroad. But one place they do not move is along the MKARNS waterway. We’ve got to change that,” said Barlett. “Being at the junction of the major forms of transportation—truck, trains, and barge—we are uniquely positioned geographically to be a solution to the supply chain problems affecting our country.”

LURING SHIPPERS TO THE WATERWAY

Tulsa Ports is working with manufacturers and shippers to lure containers to the waterway. With the cost escalation in container movement over the last two years, in addition to costs driven by truckdriver shortages and the pandemic, it is becoming a more important opportunity. Additionally, many large shippers and carriers are looking to become carbon neutral, and this may also help drive container movements to the MKARNS.

Bartlett said, “It’s pretty simple math. One towboat can push 12 barges on our river. Each of those barges can carry the equivalence of 60 semi trucks. That means that one towboat can replace 720 semi trucks. Think about the impact of that one boat—the reduction of emissions, the cost savings in fuel, and the elimination of truck traffic on our interstate highways.”

“My colleagues on the Port Authority Board of Directors are committed to the continued success and growth in both sites comprising Tulsa Ports, and the McClellan-Kerr Arkansas River Navigation System,” said Bartlett. “We believe that 2022 is going to be an amazing year of growth and opportunity at the Tulsa Port of Catoosa, and the Tulsa Port of Inola.”