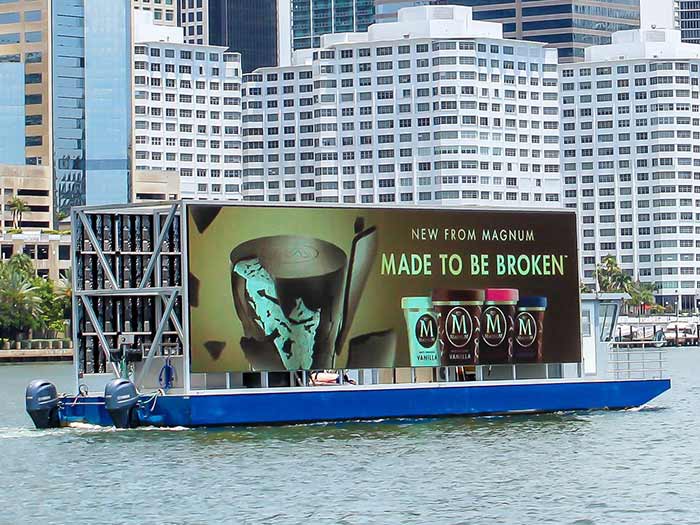 Ballyhoo Media's facebook age shows this image of one of its barges, but today its website said only "we're sorry, we're doing some work on the site"

Today, the New York City Law Department announced the settlement of a lawsuit against Ballyhoo Media.

According to the City, the company had repeatedly violated local laws by displaying Times Square-style billboards on a barge that travelled daily along the Manhattan and Brooklyn waterfronts. Under the terms of the agreement approved by the Court today, Ballyhoo will be prohibited from operating its LED billboards anywhere in New York State.

“Our legal action has resulted in a big win for New Yorkers,” said Acting Corporation Counsel Georgia M. Pestana. “Ballyhoo will no longer operate its water-based ads anywhere in New York State in defiance of laws intended to further traffic safety and the public’s enjoyment of the waterfront. We will vigorously enforce this consent decree through additional legal action should Ballyhoo violate the terms of this settlement.”

Ballyhoo has withdrawn its argument that it can continue operating despite a new law enacted by the New York Legislature in August 2019. The consent decree also prohibits any other violation of the restrictions on water-based advertising signs contained in the New York City Zoning Resolution and the New York Navigation Law. Any violation by Ballyhoo is punishable as a contempt of court.

Ballyhoo began operating in New York City waterways in October 2018. The City brought its action in March 2019 and promptly obtained a preliminary injunction restraining Ballyhoo from operating within 1,500 feet of the City and within view of any major roadway. According to the agreement, Ballyhoo now intends to relocate its boat to Florida.

The consent decree was issued by Judge Louis L. Stanton of the United States District Court for the Southern District of New York.