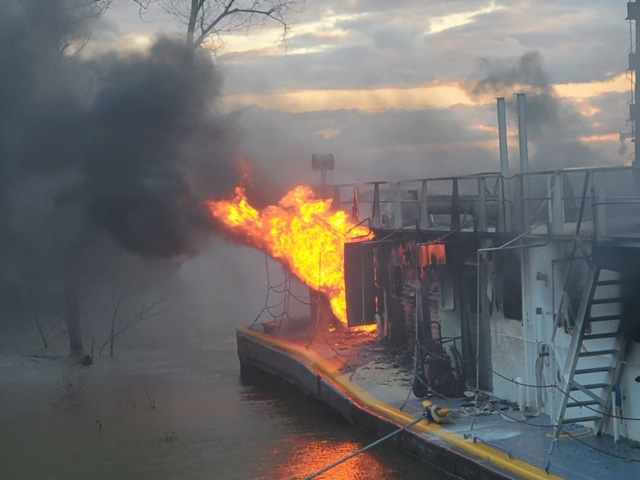 The National Transportation Safety Board has issued its report on an engineroom fire aboard a 57-year-old towing vessel that resulted in an estimated $2 million of damage to the vessel.

The incident occurred on February 26, 2020. At about 4.00 p.m., local time, the 1963-built towing vessel City of Cleveland, owned and operated by Jantran Inc., was pushing 18 dry cargo barges (15 loaded and three empty) upbound on the Lower Mississippi River, approximately 15 miles south of Natchez, Miss., when the vessel experienced a main engine failure followed by an engineroom fire.

All nine crewmembers safely evacuated to the barges and were rescued by nearby Good Samaritan vessels, which worked to extinguish the fire.

The City of Cleveland was later towed to the operator’s facility in Rosedale, Miss. No pollution or injuries were reported. Damage to the vessel was estimated at $2 million.

The National Transportation Safety Board determines that the probable cause of the fire aboard the City of Cleveland was the catastrophic failure and crankcase breach of the port main engine resulting from the failure of a connecting rod assembly. Contributing to the severity of damage to the vessel was the lack of a fixed fire-extinguishing system for the engineroom, as well as the loss of electrical power to the single fire pump.

The NTSB accident report ends with this caution:

ENGINEROOM FIRES
Engine rooms contain multiple fuel and ignition sources, making the spaces especially vulnerable to rapidly spreading fires. Designers and operators of towing vessels should evaluate fire hazards and provide effective means to mitigate them. Operators should have equipment and procedures in place to quickly contain and suppress engineroom fires before they can spread to other spaces and/or cause a loss of propulsion and electrical power.