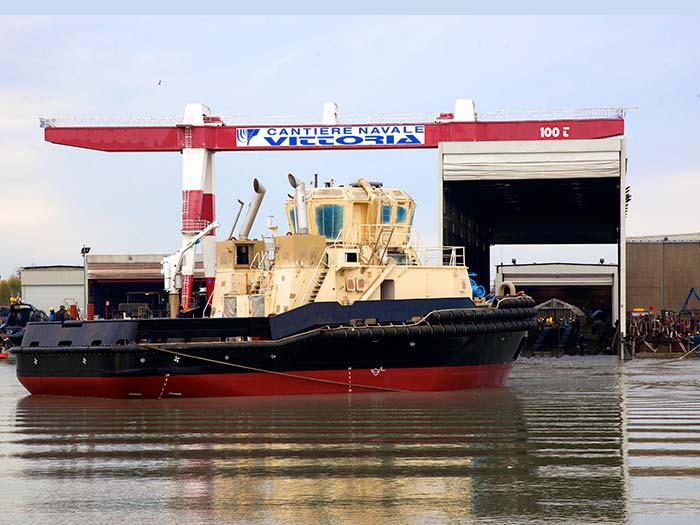 DECEMBER 12, 2017 — Italy’s Vittoria Shipyard has marked its return to the Italian and international harbor and offshore tugboat market with the launch of the C869, a 26 m towing and escort tug designed and constructed for the harbor authority in Skikda, Algeria.

In recent years, Vittoria has specialized in building military and paramilitary vessels, work vessels and passenger transport vessels. For the Adria-based yard, the C869, together with another vessel to be built for Russia, mark a significant breakthrough into the construction of ASD-type tugs with azimuth thrusters.

“The ability to innovate and keep high the quality of our products, which is the product of R&D investment, has allowed us to return to the important tug market,” said Luigi Duò, president of Vittoria Shipyard. “With the launch of this vessel we want to earn a chance to become a reference manufacturer in this sector too.”

Final works, sea trials, and delivery, which is scheduled for spring 2018, will follow the launch of the C869.

Mr. Duò says that Vittoria won the Algerian order by beating tough international competition from nine other shipyards, including, he says, “the best-known producers of tugs.”

“That makes us especially proud and confident that other sector operators, especially the Italian ones who often go to foreign firms, will feel they can look at Vittoria as a favorable potential option,” he says.

Ordered by the Algerian Ministry of Transport in December 2016, for a total value of around 7 million euros, the C869 is designed to carry out towing and escort operations, both in harbor and coastal environments.

The vessel has an overall length of 26 m, beam of 10 m and a draft of 3.80 m for around 500 tonnes of full load displacement. The tug will have more than 30-tonns bollard pull capacity, will be able to work as an escort and is equipped with a pair of azimuth ASD thrusters driven by two medium speed diesel engines producing a total of over 3,300 horsepower. The unit has accommodations and services to house a seven-person crew and the vessel is being built to Bureau Veritas class.