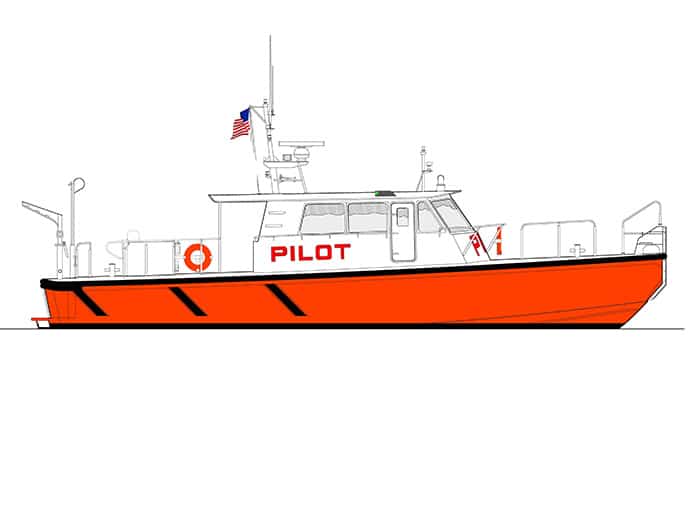 It will be the pilots’ tenth launch built by the Somerset, Mass., shipyard. Delivery is scheduled for mid-2023.

The all-aluminum launch is entirely designed and outfitted to optimize harbor service. It displaces about 2,000 pounds less than a similar sized offshore pilot boat. As a result, the boat accelerates faster and reaches a higher top speed, explained Peter Duclos, the shipyard’s co-president and director of sales.

Each engine will be connected to an IPS 3 propulsion pod, fitted with dual forward-facing, counter-rotating propellers and integrated exhaust system, and Volvo Penta’s integrated EPS electronic steering and control system at the helm station and control station at the transom.

A Humphree interceptor trim control system, with its automatic trim optimization, automatic list control, and coordinated turn control functions will be installed at the transom.

An Alaska Diesel generator, with 12 kW of output, will provide electricity.

The vessel’s pilothouse will be installed amidships on a flush deck, with the helm station on center. A lightweight canopy will extend approximately seven feet aft of the pilothouse to accommodate small groups. The arrangement is designed for up to two crew to stay overnight or live aboard. The pilothouse is outfitted with four Norsap shock-mitigating reclining seats, two berths, a small galley and settee with a table. The forecastle includes an enclosed head, two berths, a hanging locker and exposure suit cubbies.

Outside of the wheelhouse are heated side-decks and handrails to prevent ice accumulation. A Harken safety rail track system will be installed on the wheelhouse handrail. At the squared-off bow is raised vertical fendering with integral steps for transfering pilots to and from docks. A control station is located near the stepped transom, along with a winch-operated rotating davit system over a recessed platform for pilot rescue operations.