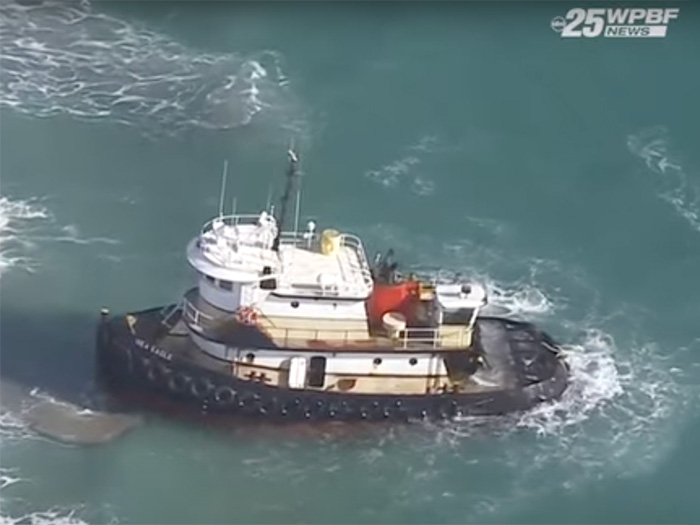 A tug and barge chartered by the Navy’s Military Sealift Command ran aground at Deerfield Beach, Fla., February 3. The barge was carrying ordnance, fuel and other supplies for the Atlantic Undersea Test and Evaluation Cente (AUTEC), Bahamas, and, according to the Coast Guard, the Navy Explosive Ordnance Disposal Mobile Unit Six (EODMU 6) will safely clear the barge of any potential munitions or ordnance on board.

The incident began when the crew of the 70 foot tug Sea Eagle sent out a Mayday call, Thursday, at about 8:45 p.m., to USCG Sector Miami watchstanders reporting they were in distress and taking on water with four people aboard.

CBP AMO rescue crews arrived on scene and picked up three people from the attached barge. Station Fort Lauderdale’s crew rescued the Sea Eagle’s captain, who had stayed behind with the tug.

Sea Eagle’s crew was reunited on Station Fort Lauderdale’s vessel and were brought to shore. There were no reported injuries.

The tug is reported to have approximately 10,000 gallons of diesel fuel on board.

The tug and barge are operated by NOSAT, Northcliffe Ocean Shipping & Trading, which is currently working with a salvage company to safely remove the tug and barge, and tow them to a nearby port.

According to a NOAA incident report, the salvor retained is Resolve.