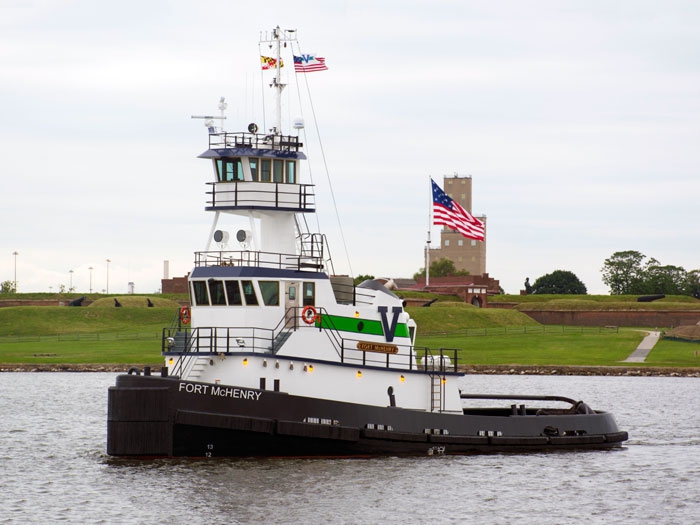 AUGUST 16, 2016—Baltimore-headquartered Vane Brothers is adding three new classes of tugs that are being built at three different shipyards as part of its extensive ongoing fleet expansion.

The 110 ft x 38 ft x 17 ft tugs are being built by Conrad Orange shipyard in Orange, TX. Castleman Maritime says Conrad laid the keel for the tugs in December 2015, only three months after the design began for the tugs.

According to Vane Brothers spokesman Blaise Willig, the first of the class, the Assateague, will be delivered in late 2017, followed by the Chincoteague and Wachapreague in 2018.

The three tugs will be mated with three 800 Series 80,000 bbl tank barges being built by Conrad.

Each tug will have a raised forecastle and admeasure less than 500 gross tons. Each tug will be powered by two Cummins QSK-60 diesels driving open propellers through Reintjes reduction gears. Two 125-kW Cummins generators and one 60-kW Cummins emergency generator will power the tugs’ electrical systems. The tugs will connect to barges via a Beacon Finland JAK-700 coupling system.

Castleman Maritime’s President, Gregory E. Castleman, says he is “proud to be a part of their impressive new construction program. It has been a pleasure to work with their talented and experienced team to develop this new class of tugs.”

The design reflects Castleman’s 40+ years of experience in the design of many types of service craft, including tugs, barges, crewboats, and offshore supply vessels.

CHESAPEAKE CONTINUES SERIES
This past July, Vane Brothers took delivery of the 3,000 hp tug Fort McHenry, the most recent of 12 Sassafras Class tugs built by Chesapeake Shipbuilding, Salisbury, MD, since 2008. The Sassafras Class is designed by Frank Basile, PE, of Entech Designs, LLC, Kenner, LA. The class is 94 feet x 32 feet, with a hull depth of 12 feet. Each tug is powered by two Caterpillar 3512 Tier 3 main engines and operates with a a Jon-Rie Series 500 hydraulic towing winch.

Vane Brothers has also added the Double Skin 317 bunker barge to its Echo Fleet operating out of Philadelphia, PA. The DS-317 is the last in a series of seven 35,000 bbl bunker barges to be delivered by Conrad Orange.

The Double Skin 601 is the first in series of 55,000 bbl barges being built by Conrad Deepwater South Shipyard in Amelia, LA.

Also designed by Frank Basile, the Elizabeth Anne Class tugboats are a close cousin of the company’s Basile-designed Patapsco Class tugboats, 15 of which were produced between 2004 and 2009. With a length of 100 feet, beam of 34 feet, and hull depth of 15 feet, the model-bow Hudson has two Caterpillar 3516 Tier 3 main engines, each producing 2,100 hp at 1,600 rev/min. Two John Deere PowerTech 4045, 99 kW generators deliver service power to the boat, while a third John Deere 4045 teamed with an Allison transmission drives the chain-driven INTERCON DD200 towing winch.