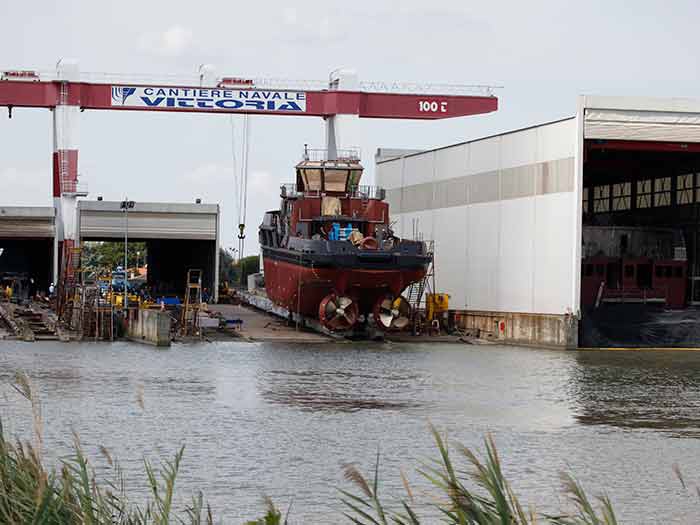 SEPTEMBER 25, 2018 — A tug being built for the Russian Federation by Italy’s Vittoria Shipyard will be used for operations in the Barents Sea to dismantle decommissioned nuclear submarines.

Recently launched at the shipbuilder’s Adria facility and called Rome-Moscow, the EUR 8 million tug is being built after Vittoria Shipyard won a 2016 public tender by the Italian Ministry of Economic Development (MISE) as part of an agreement between the Italian and Russian governments on the issue of handling radioactive waste.

“With this build we strengthen our positioning in the domestic and international harbor and oceanic tug market,” said Vittoria Shipyard President Luigi Duò. “We are now focussing on becoming a point of reference.”

The launch will be followed over the next few months by sea trials and the hand over of the vessel.

Rome-Moscow has been designed to meet the quality and safety levels required by the Russian flag to work in the difficult sea and weather conditions in the Barents Sea. In particular, it is designed and built to be able to work in temperatures as low as minus ten degrees centigrade and ensure that, while docked at quay during the winter, its heating systems can cope with keeping the crew’s quarters warm even when the temperature falls to -34 degrees.

The vessel was built and overseen in accordance with the Russian Maritime Register of Shipping (RMRS) regulations, and meets the Russian Federation Flag standards for on-board living and health conditions.

The tug is around 32 m long and was designed to be able to pull, push and escort vessels in harbors or at open sea, including when ice is present, lead other vessels in mooring manoeuvres and recover vessels in failure. It ship will have a bollard pull of 64 tonnes and a dynamic pull of 54 tonnes, and will reach a speed of 12.5 knots thanks to two high speed diesel engines linked to the two azimuth drives with variable pitch propellers.