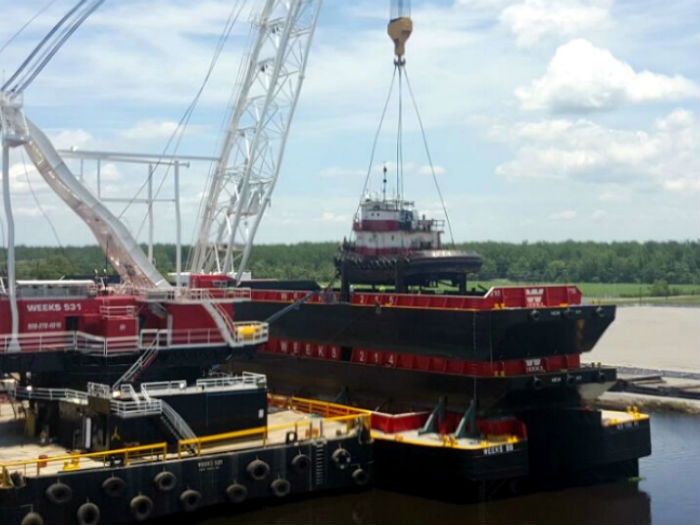 In engineering consultation with JMS Naval Architects, Essex, CT, Weeks decided to use an existing Weeks Marine Load Line deck barge, the Weeks 99, to carry four barges at-a-time (double-stacked) on her deck, secure them for ocean tow, and transport them from the Gulf of Mexico to New Jersey. The Weeks 99 is a converted oil tank barge measuring 300 ft by 72 ft x19 ft that had undergone modifications to increase its width to 72 ft.

JMS updating the stability documents for the Weeks 99 following modifications to also allow it to be used as a scow barge after the transportation of the smaller scows and tug was completed.

JMS performed a deadweight survey, stability analysis, and submitted the results to ABS for review and issuance of a new stability letter for the Weeks 99.

JMS also performed calculations to support modifying and converting the Weeks 99 from a deck barge to a hopper barge.

The Weeks 99, carrying four of the new sand scow barges and the Weeks Marine tug George W, will be departing the Gulf of Mexico headed for Weeks Marine’s New Jersey facilities this month.