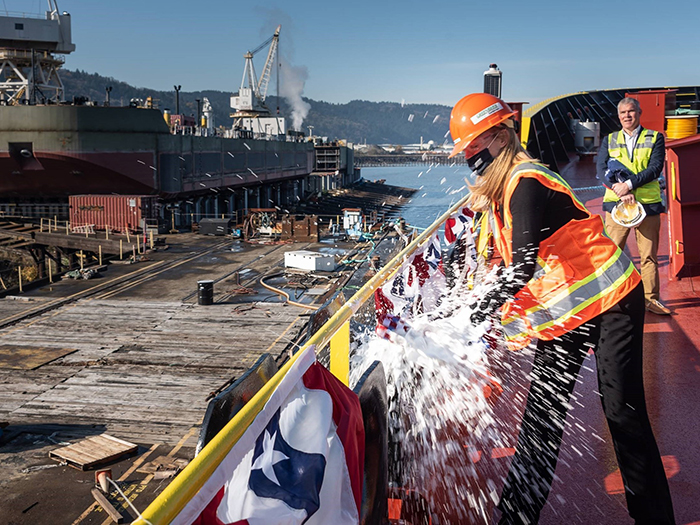 Christened last month, OSG 205 was sponsored by OSG Board Member Anja L. Manuel and was paired with an existing tug, the OSG Courageous. [Image: Greenbriar Marine]

The Greenbrier Gunderson shipyard in Portland, Ore., has now delivered the 204,000 barrel capacity oil and chemical tank barge OSG 205, to Overseas Shipholding Group, Inc. This is the second tank barge that Greenbrier Marine has delivered to OSG this year, after delivering its sister barge OSG 204 in May.

OSG 205 was sponsored by OSG Board Member Anja L. Manuel and the vessel was paired with an existing tug, the OSG Courageous.

“It has been a pleasure collaborating with OSG during the construction of these vessels. This partnership complements both companies’ dedication to supporting and strengthening the U.S. Jones Act fleet,” said Richard Hunt, General Manager of Greenbrier Gunderson. “We are proud to have completed this barge on schedule, despite challenges presented by the COVID-19 pandemic. The naming ceremony, while it looked different and more socially distant than those of prior years, was safely celebrated on November 20. We are grateful for our strong partnership with OSG and look forward to a future of working together.”

OSG 204 and OSG 205 are among the largest barges Greenbrier Marine has built, at 581 feet each. Operating from the largest side launch on the west coast, Gunderson Marine is the only shipyard in the western United States with experience in building ATBs of this type.

“Once again, Greenbrier Marine has demonstrated a capacity to manage a complicated construction project amidst a pandemic, delivering to OSG on-time and on-budget the second of our two contracted barges,” said Sam Norton, OSG’s President and CEO. “This is no small accomplishment. OSG is gratified to have partnered with Greenbrier Marine in the building of OSG 205 and to have successfully completed this important project for both companies. The OSG 205 will, together with her sister barge, the OSG 204, serve for many years to come as a visible statement of OSG’s continued commitment to supporting the U.S. maritime industry. Our thanks go out to all involved in working tirelessly to bring the idea behind this project to an admirable finished product.”