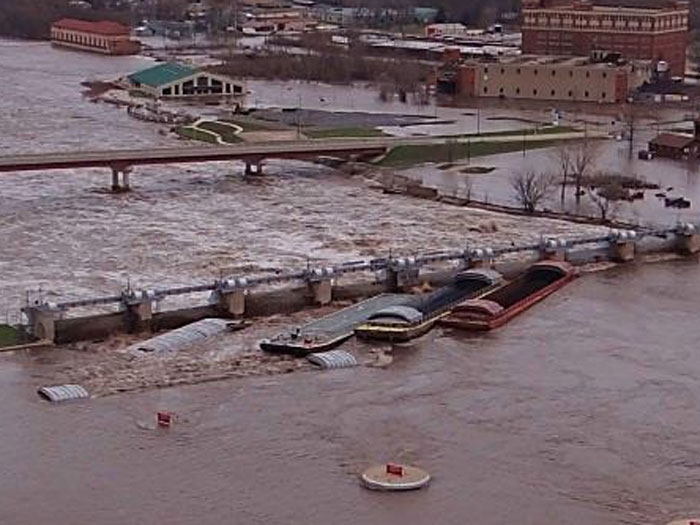 JUNE 24, 2014 — The National Transportation Safety Board has issued its report on an incident last year in which several barges slammed into the Marseilles Dam on the Illinois River. No one was injured, but the damage to the barges totaled $3,767,000 and the damage to the dam $50 million.

According to the NTSB summary of its report, on April 18, 2013, about 1740 local time, the uninspected towing vessel Dale A. Heller [owned by Midland Enterprises, Inc. and operated by Ingram Barge Company] was downbound on the Illinois River pushing a 14-barge tow and attempting to enter the Marseilles Canal, adjacent to the Marseilles Dam, when it encountered a strong cross current. Despite the assistance of three additional towing vessels, the Dale A. Heller was unable to get the tow past the dam and into the safety of the canal. Several barges broke away, struck and damaged the dam’s gates, and then sank. In addition, the accident likely exacerbated rain-related flooding in the nearby city of Marseilles, Illinois. No one was injured in the allision; however, the damage to the barges and the dam totaled nearly $54 million.

The National Transportation Safety Board determines that the probable cause of the allision of the Dale A. Heller tow with the Marseilles Dam was the decision by all involved parties to proceed with the passage of the tow during a period of record-high water and significant risk. Contributing to the accident was the failure of the Marseilles Dam lockmaster and the Dale A. Heller captain to communicate effectively about the actual positioning of the dam’s gates before and during the transit.