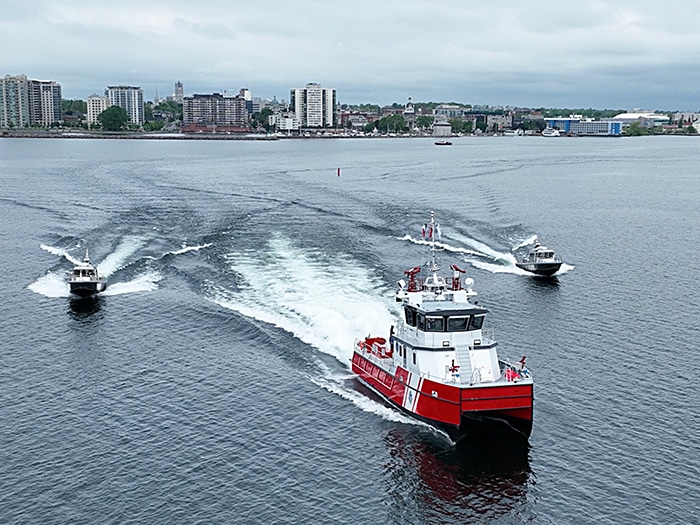 MetalCraft Marine’s Kingston, Ontario, shipyard has completed what it calls a “behemoth” of a fireboat for the Kuwait Fire Service, whose director, General Mosa Ackbar set the basic requirements for the vessel. He needed very high towers that could shoot huge volumes of water over and across the high decks of oil carriers. Kuwait exports approximately 2,000,000 barrels of oil per day and, as oil fires are very hard to put out, the boat would need a massive amount of petroleum extinguishing foam.

That presented a number of challenges and MetalCraft Marine’s solutions are incorporated in the Monjeb 2. The first MetalCraft Marine FireCat of its kind, the 82 foot long by 25 foot beam vessel carries 2,400 liters of fire extinguishing foam and can shoot 12,000 gallons of water per minute from its two 45-foot high hydraulic towers.

According to MetalCraft, the 28-knot boat moves so smoothly through the water that there is virtually no wake.

The vessel’s catamaran hullform gives a good indication of how MetalCraft Marine came up with a vessel meeting Kuwait’s needs.

MetalCraft started on preliminary designs back in early 2015. Several concepts did not fly due to the stability problems involved in shooting so much water from such a height. MetalCraft started looking at outside designs that were designed around severe sea states that could make good speeds and carry heavy loads and specifically to North Sea offshore wind support vessels.

MetalCraft opted to go with a Walker Marine Design CTV (crew transfer vessel) hull design that had very tall catamaran hulls that were wide enough to house large diesels and lots of firefighting equipment. Another deciding factor was that several dozen of the vessels were in service.

As a fireboat, the design would be more heavily laden than a CTV and so tank testing was used to verify its speed at 175,000 pounds. The test revealed a 27 knot maximum speed as was the prediction of the designer.

The wheelhouse and systems design in Monjeb 2 are a combination of MetalCraft and Walker designs. The fire systems were designed by MetalCraft and Jason Engineering of Norway.

Thousands of hours were spent designing the systems to be flawless and easily operated and serviced. Each equipment component had to be vetted and verified through engineering. The Jason fire pumps were rated for 5,000 gallons per hour each but delivered well over that. Each of the large monitors mounted on the towers could shoot 460 feet.

Jason supplied a large multifunction display console that can be used to operate every part of the fire system from the bridge.

All six fire monitors are electronically controlled and have electrically activated valves as well.

The water curtain when tested could obliterate visibility if the forward diffusers were opened. However, it could easily protect the craft from large flying embers and the boat could be run completely on its navigation electronics.

The boat has a US Fire Pump hydraulic de-watering system with a long hose reel for dewatering ships. It has a 2,000 gallons per hour dewatering capability.

The bridge has a full width wrap around console that houses all controls and the Jason full control display, which controls all six fire monitors, the hydraulic towers and the pumps all electronically.

There are two 16 inch Raymarine Axiom Pro screens plus two 9 inch screens on the main console and a 16 inch screen at the command console.