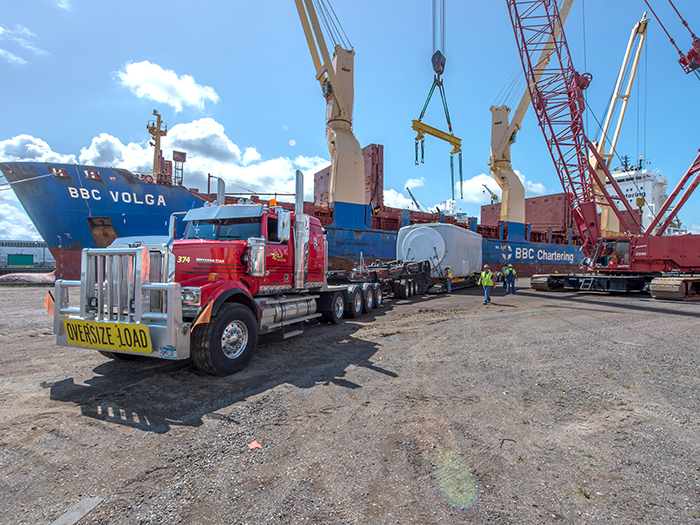 “U.S. Great Lakes ports are reporting cargo growth as they support the region’s construction activity and energy needs and help our cities prepare for the winter ahead,” said Bruce Burrows, President of the bi-national Chamber of Marine Commerce. “Iron ore exports from Minnesota to Japan and China via the St. Lawrence Seaway are also continuing.”

The uptick at the ports comes despite a downturn in St. Lawrence Seaway tonnage for the season (March 22 to September 30) which handled 24.8 million metric tons, down 6 percent from 2018. The figures reflect factors including a decrease in U.S. corn and soybean exports from earlier in the spring and current delays in the Canadian Prairie harvest due to the wet field conditions.

Looking around the ports, the Port of Duluth-Superior saw overall tonnage pacing slightly ahead of last season and the five-season average. Grain made a strong move in September, posting its second-highest monthly tonnage total of the season and narrowly outpacing 2018. General cargo movement continued steady, with wind energy cargo arrivals from overseas via the Seaway tracking toward a record total. In addition, iron ore tonnage outpaced the September 2018 total by 3 percent, putting it almost 16 percent ahead of the five-year average.

Shipments of limestone and petroleum products continued to lead the way at the Port of Green Bay in September, bringing its year-to-date shipping total to more than 1.6 million tons through September; 17 percent ahead of 2018.

“It’s great to see the strong tonnage numbers for September,” said Dean Haen, Port of Green Bay Director. “We’ve had solid numbers for petroleum (up 44 percent over last year) and limestone shipments (up 64 percent over last year) throughout the season and salt shipments are typically strong this time of year with winter months not too far away. We’re optimistic that we’ll see a good finish for the 2019 shipping season for the Port and for the entire Great Lakes. It’s a good sign for the regional economy.”

Overall tonnage through Port Milwaukee is up 25 percent as the Port’s handling of salt, cement, steel, and other specialty cargoes have led the way this year.

“Port Milwaukee is continuing an impressive streak into the last quarter of 2019,” said Director Adam Schlicht. “The Port’s efforts to strategically market its multimodal capabilities to domestic and international customers is having a prodigious effect, culminating in the Port’s receipt of the American Association of Port Authorities (AAPA) national Overall Award of Communications Excellence this week in Virginia.”

In September, the Toledo-Lucas County Port Authority reported a slight decrease in tonnage compared to the 2018 season. While coal, iron ore and grain were down, general cargo, dry bulk and petroleum numbers were up with robust aluminum shipments leading the way. The Port also handled bulk sugar for the first time since 2015. “The same vessel that brought sugar from Mexico to the Port of Toledo sailed up the Maumee River and loaded a combination of soybeans, distiller dry grain (DDG) and corn gluten meal (CGM). This single vessel discharge and reload is a great example of the diverse cargo mix handled at the Port of Toledo,” said Joseph Cappel, VP of Business Development for the Toledo-Lucas County Port Authority. “With the ability to match export cargos with incoming shipments, the Port of Toledo can provide an efficient and cost-effective solution for shippers.”