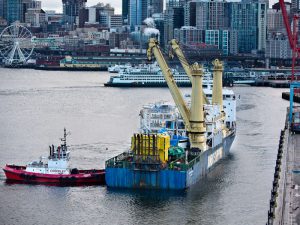 “In the more than seven years that Shell has held leases in the Chukchi, it has only recently been allowed to complete a single well. What we have here is a case in which a company’s commercial efforts could not overcome a burdensome and often contradictory regulatory environment,” says Murkowski. “The Interior Department has made no effort to extend lease terms, as recommended by the National Petroleum Council. Instead, Interior placed significant limits on this season’s activities, which resulted in a drilling rig sitting idle, and is widely expected to issue additional regulations in the coming weeks that will make it even harder to drill. Add this all up, and it is clear that the federal regulatory environment—uncertain, ever-changing, and continuing to deteriorate—was a significant factor in Shell’s decision.”

Murkowski made the point that just because the U.S. has created a difficult environment for offshore drilling in the Arctic, it doesn’t mean other countries have. “Development in the Arctic is going to happen—if not here, then in Russia and Canada, and by non-Arctic nations,” says Murkowski. “I personally believe that America should lead the way. The Arctic is crucial to our entire nation’s future, and we can no longer rely solely on private companies to bring investments in science and infrastructure to the region. As the Arctic continues to open, we urgently need to accelerate our national security investments in icebreakers, ports, and other necessities.”

But this should probably be viewed more like a pause as opposed to a full stop. A more favorable regulatory environment for Arctic offshore drilling could develop if a Republican is in the White House in 2017 backed by a Republican-controlled Congress. Additionally, cheap oil and gas should also increase consumption and eventually lead to higher prices and make Arctic drilling more economically attractive.

Portland, OR, headquartered Vigor Industrial, the largest shipyard group in the Pacific Northwest with 12 facilities in Alaska, Washington, and Oregon, had bolstered its capabilities in anticipation of an increased workload. It added an 80,000-ton lifting capacity dry dock to enhance its ship repair and maintenance capabilities and merged with Kvichak Marine Industries, Seattle, WA, to add capabilities in new aluminum vessel construction. Vigor had supported Shell’s earlier efforts in Alaska, including the activation of the drilling barge Kulluk, and more recently repaired the damaged icebreaker Fennica.

Vigor is part of a vibrant Washington State maritime cluster that includes logistics and shipping, fishing and seafood, and shipbuilding and repair. According to a recent economic impact study, generated 148,000 direct and indirect jobs and directly creates $15.2 billion in gross business income and has a total impact of $30 billion on the state’s economy.

Back in March, Vigor “christened” its dry dock Vigourous with work on the cruise ship Norwegian Star and followed that up with repairs to the USNS John Glenn and USNS Montford Point. Now Vigor will turn its attention to completing the third Olympic Class 144-car ferry for Washington State Ferries and look forward to building the fourth in the series, which recently received $122 million in funding by the state legislature. There’s plenty of more coverage on the ferry market in this issue, including Seattle-based Elliott Bay Design Group’s support of ferry projects for the New York City Department of Transportation and Texas Department of Transportation.

This past May, Gunderson Marine, Portland, OR, had launched the Kirby 185-01, a oil & chemical tank barge.

The Nancy Peterkin’s sister ATB tug, the Tina Pyne, is set for launch this December.

The vessel was towed to Everett, for lightship, stability testing and fuel transfer. Following this the tug will be towed to Nichols Brothers outfitting pier in Langley, WA, located across the Puget Sound from Everett, WA, for final outfitting, dock and sea trials before its final delivery.

Used for vessels greater than 1,000 tons, the new launch system significantly increases the displacement and draft of the vessels that Nichols Brothers can haul and launch in the future. Currently the shipbuilder is engineering to install ridged buoyancy tanks to the side of the launch frame, eliminating the need for the floating cranes in the future.

Keels will be laid for both vessels this fall with delivery of the first vessel scheduled for May 2017 and the second vessel is scheduled for delivery in November 2017.

Jensen Maritime Consultants, Seattle, the naval architectural and engineering arm of Crowley Maritime, will provide the ABS Class and functional design for the tugboats. These tugboats will carry an ABS loadline, compliant with USCG, as required at delivery.

Nichols Brothers spokesperson Lacey Greene says the shipyard has just begun construction of the American Samoa 140 ft Multi-Purpose Cargo/Passenger Ferry, and next year will begin construction on the superstructure and final assembly of the WETA 400-passenger high speed catamarans.

“The vessel construction boom in the Pacific Northwest has impacted the economy in so many different ways,” says Greene. “Specific to our location our community is flourishing. Nichols Brothers is the largest private employer on Whidbey Island in Washington State and employs 300 men and women. We foresee the economic boom expanding even further; the tug market is strong in all aspects, from ATB tugs, tractor Tugs, to line tugs. We also see the passenger vessel industry sector thriving, and we predict additional passenger only high-speed ferries coming down the pipeline as well as leisure vessels.”

MSI turned to Glosten to develop the design in response to requests from vessel operators and the first of a kind modular ballast water treatment units combine expertise from Glosten, MSI and Alfa Laval, which provided PureBallast 3.1 treatment systems, Filtrex high efficiency filters, and expertise from hundreds of ballast water management system installations.

The resulting modules, built at the Foss Seattle Shipyard, complete with lighting, ventilation, and integrated controls, were shipped ready for “plug-and-play.”

Each Ballast Module packs a treatment capacity of 1,000 m3/hr within a 20-foot shipping container footprint and is ABS and U.S. Coast Guard approved for hazardous area installations.

Using the module reduces the technical demands on busy shipyards. Rather than juggling independent components and vendors, shipyards can instead focus on fabricating a few well-defined interfaces and foundation system. Each purchased module comes pre-approved by USCG and ABS, is fully tested prior to shipment, and includes integration support from MSI and Glosten engineers.

“The demands of the vessel operator drove this design,” says Kevin Reynolds, Principal at Glosten. “Doing this as a manufactured product ensures that we get it right, every time.”