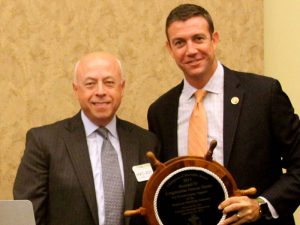 AMP says that Rep. Hunter’s longstanding support for the domestic industry is demonstrated through his work as Chairman of the Subcommittee on Coast Guard and Maritime Transportation and as a member of the Seapower Subcommittee of the House Armed Services Committee. AMP adds that as the first U.S. Marine Corps combat veteran of the wars in Iraq and Afghanistan elected to U.S. Congress, Rep. Hunter understands the importance that the maritime industry serves in the everyday lives of our civilians and our service men and women.

“The true champions of maritime are the hundreds of thousands of highly-skilled service men and women in the American maritime industry who tirelessly work to protect our waterways — such a strength in defense wouldn’t be possible without the Jones Act,” said Rep. Hunter in accepting the award. “I will continue to vocalize my support for the American maritime industry; one that creates good paying family -wage jobs, secures our borders, and fuels our economy.”

This past June, Rep. Hunter demonstrated his commitment to the U.S. maritime industry when he joined hundreds of veterans and active military at the American Maritime Partnership’s Military to Maritime career fair in San Diego where he met with men and women looking to transfer their specialized skills earned from the military into a lucrative career in U.S. maritime.

“Chairman Hunter has been a tremendously valued champion for the domestic American maritime industry, serving as a leader who truly understands our industry’s critical role to the vitality and security of our nation,” AMP Chairman Tom Allegretti said. “From his time in the service to his seat as Chairman of the Subcommittee on Coast Guard and Maritime Transportation, Congressman Hunter has witnessed first hand what it takes to sustain a strong maritime industry and because of his dedication, we are honored to provide him with our highest honor – the Champion of Maritime Award.”