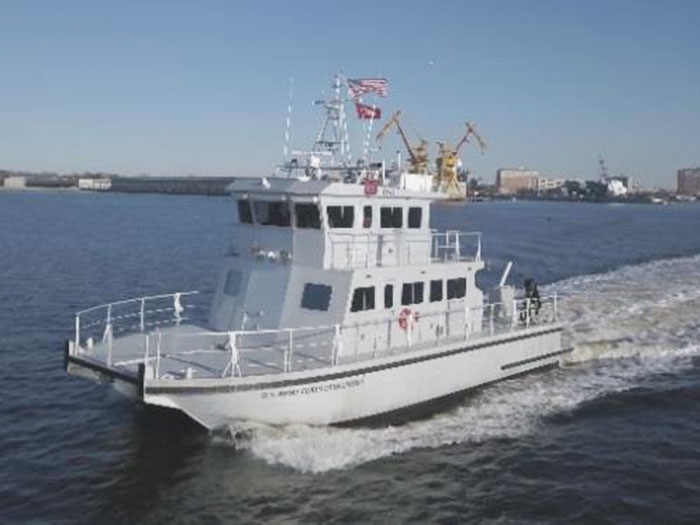 Named S/V Ewell, the vessel has been accepted by the U.S. Army Corps of Engineers (USACE) Norfolk District and is due to be commissioned May 31, 2018.

The all aluminum Ewell has a 61 ft 4 in length overall and 24 ft beam.

The vessel has two levels; the first level has survey stations and a pilot house is on the second level. Its primary mission to conduct hydrographic surveys using sophisticated multibeam and single beam sonars.

TAI was the prime design-build contractor of the high-speed, foil-assisted hydrographic survey vessel. TAI and Aluma Marine personnel worked together on the construction of the Ewell under TAI’s supervision at Aluma’s shipyard in Harvey, LA.

Designed and built to Lloyd’s Register Special Service Craft rules, the Ewell is equipped with twin 985 bhp MAN V8 propulsion engines which each turn a Hamilton waterjet allowing for quick mobilization and response at high speeds in excess of 34 knots and survey speeds up to 10 knots.

Mr. Anil Raj, President of TAI said; “This vessel Design and Build Program was delivered on budget and on schedule. The successful project performance of this variant using the 2017 ‘Significant Work Boat’ award winning hull, resulted from the partnership with the USACE Marine Design Center (MDC), USACE Norfolk District and TAI who jointly implemented the project. The fabrication yard, Aluma Marine and the craftsmen who worked with and supported TAI personnel at the facility, are to be commended. We are happy that the USACE received its second of three custom crafts suiting all of its requirements, and that the USACE is pleased with the craft’s performance and the crew training provided under the contract. A third, larger. vessel is planned be delivered to the USACE Mobile district this summer.”

The Foil Assisted Catamaran system offers high speeds with minimal installed BHP and fuel consumption. This configuration with a 400 NM range and swift speed capability makes such a craft an ideal application for Near Coastal and Harbor Patrol, Interdiction and Search and Rescue.