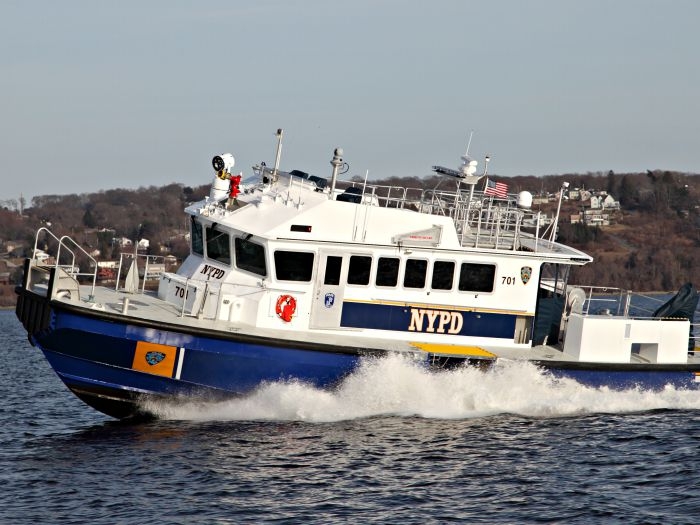 AUGUST 13, 2015—As it marks its 60th anniversary, Gladding-Hearn Shipbuilding, Duclos Corporation has been “running flat out” in the words of company President Peter Duclos, with an order book of monohull steel and aluminum catamaran ferries, pilot boats and patrol boats. It also supports the repair and maintenance needs of regional operators. For example, it recently completed the engine refit of the high-speed ferry Salacia for Boston Harbor Cruises.

Right now, the Somerset, MA, family-owned shipbuilder employs about 150 workers, but is always looking for more skilled workers, says Duclos. He says the company has used skilled labor providers such as the Sons of Neptune, Services Inc., and Tradesmen International to find pipe fitters and welders. “It’s a great way to find and vet employees,” says Duclos.

The latest delivery from the shipyard is a 70 foot long Tactical Response Vessel for New York City’s Harbor Patrol Unit. It is the second of  two sister vessels of a five-boat order from the New York City Police Department.

Measuring 68.8 feet on deck, with a 19-foot beam and 3.8-foot draft, the new high-speed, Tactical Response Vessel is based on a design from C. Raymond Hunt. It has a deep-V hull and a “squared-off” bow, with fendering and knees installed above the main deck to facilitate bow landings.

Designed and built to respond to terrorist activities on New York City’s waterways, the all-aluminum boat is both versatile and highly functional, said shipyard officials. Inside the flush-mounted wheelhouse and its forward-leaning windows in the front and the side and aft windows offer 360-degree visibility. The view is further enhanced from the fly-bridge.  The command center, aft of the helm station, includes a computer work station and seating for the five crew members. In the forecastle are two berths, storage lockers, a small galley and settees, and an escape hatch in the deck above.

The superstructure, including the fly-bridge, has ballistic-resistant windows and panels installed on the sides, front, back and roof. An American Safe Room Nuclear, Biological and Chemical (NBC) filtration system pressurizes the vessel’s accommodation spaces. Two decontamination showers, along with a containment system, are located on the aft deck. A 1,500 gpm remote control water cannon is mounted on the wheelhouse roof.

Along the wide side decks are port and starboard rescue recesses, each equipped with a davit for lifting a Stokes litter-basket stretcher onto the main deck. A guard over the water-jets forms a fixed rescue platform accessible by a hinged grating in the main deck. The forward, side, rescue-recess and aft decks are heated to prevent icing in the winter. On the aft deck is a hydraulic, knuckle-boom crane for launching and recovering a tender.

The vessel is powered by twin 12-cylinder MTU-12V2000M94 diesel engines, each producing 1,920 bhp at 2,450 rev/min, giving the boat a top speed of over 41 knots, and at 30 knots a range of about 225miles. The engines turn a pair of Hamilton HM571 water-jets through ZF3050 gearboxes. A 30 kW Northern Lights/Alaska Diesel generator provides service power. Twin Humphree interceptor units, each fitted with an automatic trim and list control system, adjust the vessel’s running trim and list at various speeds and load conditions.

The heating and air-conditioning, a chilled water/heated loop system, includes a 48,000 Btu chiller and an Espar 16kW diesel heater.