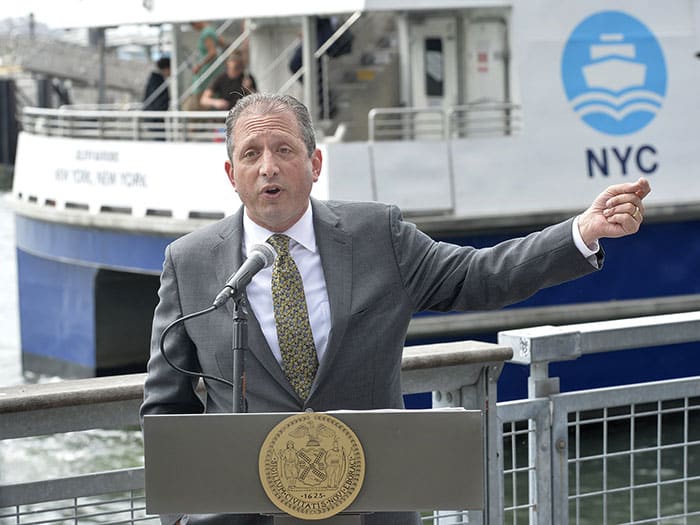 The comptroller made 11 recommendations aimed at improving oversight over the ferry system and protecting the fiscal integrity of New York City. NYCEDC accepted some of the recommendations for providing enhanced transparency and agreed to issue a new RFP for the system operator.

However, says the comptroller’s office, NYCEDC refused to include a full accounting of the ferry system in its audited financial statements, or to seek recoupment of approximately $12 million in overpayments to system operator Hornblower.

According to the comptroller’s office, NYCEDC incurred a total of $758 million dollars in total ferry-related expenditures from July 1, 2015, through December 31, 2021, yet only reported $534 million as ferry-related expenses in its audited financial statements and other records. The total New York City subsidy-per-ride is nearly double the original estimate of $6.60 and has been consistently underreported.

The audit also found that several decisions—including the early termination of the previous East River route operator’s contract and lack of proper oversight over vessel acquisition—resulted in as much as $66 million in unnecessary expenses.

The audit’s many findings, says the comptroller’s office “collectively indicate poor oversight and a failure to hold the operator, Hornblower, accountable to the fiscal terms and conditions of their contract.”

There is much, much more in the full report, which should be compulsory reading for all ferry operators and all shipyards intending to build ferries. Among other things it goes into details NYEDC’s reported building cost for each vessel at each shipyard for the system’s 38 vessels.

The full report contains the NYEDC’s response to the comptroller’s findings.

In it, Fred D’Ascoli, executive vice president and CFO of NYCEDC, notes that “NYC Ferry is a system beloved by millions of New Yorkers.”

Saying that the historical context of NYC Ferry is “not well-documented in the audit,” D’Ascoli points out that, in 2015, NYCEDC was charged with implementing a massive and complex ferry system to offer millions of New Yorkers an affordable safe and dependable transit option to support commuting and access to waterfront communities across the five boroughs.

“We had we had under three years to do this and were told by experts that a system of this scale would be impossible to deliver in this timeframe,” writes D’Ascoli. “Yet, NYC ferry launched on time with the fleet of purpose built vessels and ridership that exceeded projections in its first months. At inception NYCEDC delivered a fleet of19 vessels, opened 15 new landings and outpaced its ridership projections by 40% in the first year.”

“The network now spans 70 nautical route miles and has 25 landings … even though a pandemic decimated ridership on transit systems across the world, NYC Ferry proved its resilience by demonstrating the fastest return of ridership of any mode of public transportation in New York City as of the date of this let it NYC ferry ride the ship has fully returns and has in several months exceeded pre-pandemic levels.”

“As the first operating agreement for NYC Ferry draws to a close,” writes D’Ascoli, “NYCEDC intends to issue a request for proposals (RFP) for a new operating agreement through a public, competitive procurement process. NYCDEC has learned much in its first years of service and is committed to using that knowledge to optimize NYC ferry operations and improve the mechanisms by which we administer the system.”