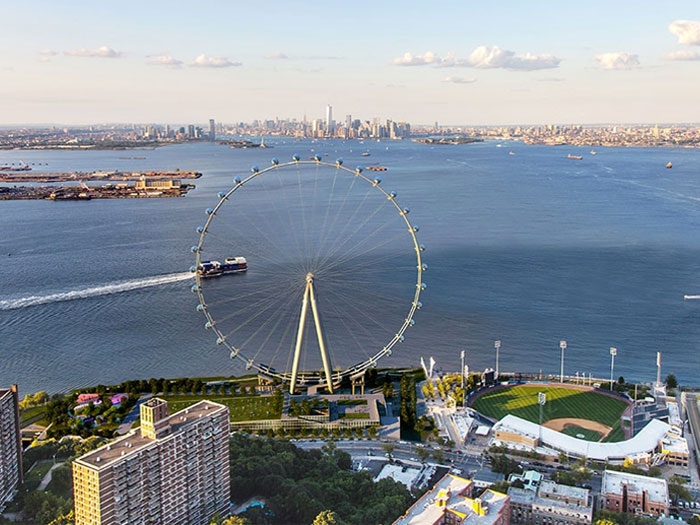 When opened in 2017, the New York Wheel will provide riders with a spectacular view of New York Harbor

JULY 22, 2016—New York City is rediscovering and embracing its connection with the water. N.Y. Mayor Bill de Blasio’s vision to connect the city via an extensive ferry service network is a prime example of this (see earlier stories and “A return to its maritime roots,” p. 35 in the June 2016 issue for more details).

Now an ambitious new waterfront development under construction adjacent to the Staten Island Ferry Terminal in St. George on Staten Island is promising to attract some 6 million annually to retail outlets, restaurants, a beer garden, a boutique hotel and area attractions. The development is anchored by a spectacular 630-foot tall ferris wheel that expects to draw between 3 million to 3.5 million tourists and local residents in its first year of operation after it opens in late 2017.

During a preview tour of the site of the ferris wheel, New York Wheel CEO Rich Marin said he expects most of the visitors to come via the Staten Island Ferry, as well as from new private ferry services that will land at a dock close to the wheel. Among those interested in providing service to

“I’ve been quoted as saying that ‘If no one ever drives here, I’d be a happy man,’” said Marin. “New York Harbor is a critical part of what we are all about.”

While some 1.8 million tourists take the Staten Island Ferry, few if any see anymore of Staten Island then the ferry terminal. The idea behind the New York Wheel is to entice passengers that disembark at St. George to stay awhile, eat, drink, shop, maybe see a Staten Island Yankee game at Richmond County Ballpark, and, of course, ride the wheel.

At night, visitors to the harbor will be treated to spectacular light displays, thanks to the wheel’s $7 million worth of LED lighting.

Meanwhile, the Empire Outlets shopping mall being developed by BFC Partners will feature high-end and national retailers such as Nordstrom Rack, Dennis Basso, Niketown, with a projected opening in late 2017.