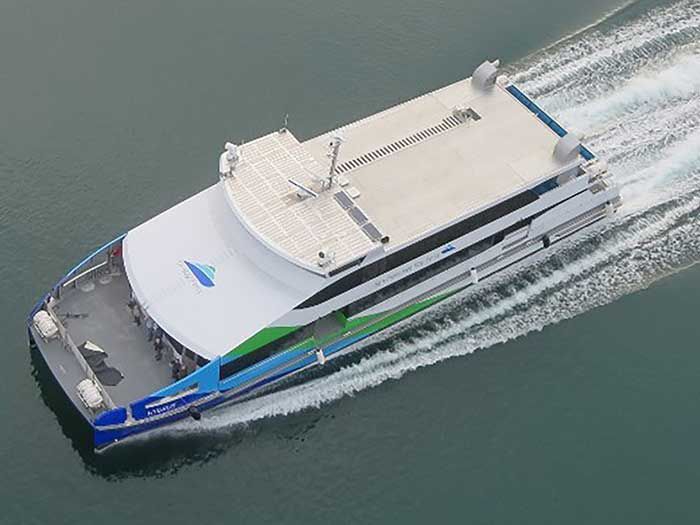 Hydrus: Ferries are each fitted with two Wesmar hydraulic V2-12 dual prop, counter rotating bow thrusters, one in each hull

The 400-passenger catamaran ferries are being built for WETA, the Water and Emergency Transportation Authority of San Francisco, by Vigor. The hulls are being built by Vigor Ballard (formerly Kvichak) and the superstructure at Vigor’s Harbor Island shipyard.

The first of the four, the Hydrus, was delivered last month. She is equipped with two Wesmar hydraulic V2-12 dual prop, counter rotating bow thrusters, one in each hull. Each system includes three control stations in the pilot house.

The Wesmar units were installed for dockside maneuvering and to assist with on and off-loading, critical to achieving fast turnaround times, ensuring ferry runs stay on schedule.

Hydrus will serve the Central Bay routes of San Francisco to Alameda, Oakland and Harbor Bay. She will be joined mid-year by a second vessel, Cetus, and two additional vessels in two years. All are the same design and each will be equipped with Wesmar systems.

The Wesmar system design delivers the extra power needed for high-speed ferries such as the Hydrus, which operates at a service speed of 27 knots. Wesmar systems are popular with ferry operators because of their ability to snug up to the dock and hold steady in windy conditions enhancing efficient and timely on and off loading.