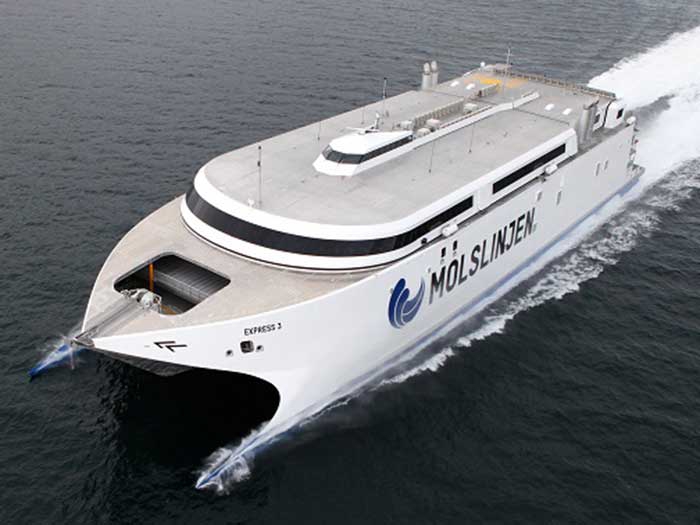 Building on extensive in-service experience with the Incat 112 m the concept was redesigned from the keel up by Incat’s in-house naval architects, Revolution Design. The resulting 109 m design delivers a lightship weight saving of just over 100 tonnes.

The design refinement has also produced a marked improvement to vessel trim. Fuel, domestic fresh water and sullage tanks have all been moved forward but, even more significantly, by repositioning the engine rooms six frames further forward, the vessel benefits from vastly improved speed and fuel consumption performance. Adding a skeg to the keel has enhanced directional stability.

On sea trials, Express 3 achieved a speed of 43 knots with 600 tonnes deadweight on board, easily exceeding contractual speed and fuel consumption expectations.

“Incat’s suppliers played their part in the quest to redefine vessel design,” says Mr. Burnell. “LifeRaft Systems Australia for example, designed and gained regulatory approval for longer Marine Evacuation Systems (MES). This allows the MES bays to be moved one deck up into the passenger space, rather than on the tween (upper car) deck on earlier vessels, resulting in a reduction in weight as well as more overall space on the tweendeck.”

Additionally, the vehicle deck layout has been enhanced with a new two pillar line arrangement, offering an overall gain of 600 mm width in workable vehicle deck space, greatly assisting loading and discharge which in turn has a positive effect on turnaround times in port;

Vehicle deck capacity offers space for up to 411 cars, or up to 227 cars and 610 m of truck space. Aside from the many proactive design and operating measures to reduce SOx, CO2, NOx and particulate matter, another important consideration was to install charging stations for electric vehicles, allowing motorists to charge their electric car as they travel across the Kattegat.

Accommodation on board Express 3 is provided for 1,000 persons with varied seating configurations in the aft, midship and forward lounges.

To service both tourist and business class sections close attention has been paid to the dining areas to cater for passengers on the busy fast routes between Odden, Arhus and Ebeltoft. In addition to a large free flow restaurant there is also an American style diner, a walk-through kiosk and an espresso coffee shop.

Tim Burnell comments, “The 109 metre catamaran is Incat’s response to increasing demand for quality newbuild high speed craft that will provide reliable year round service. We pioneered this mode of high speed transport in 1990 and our ferries have since operated over 2.5 million hours in intensive commercial service. By deconstructing already successful designs and operator experience Incat has produced a fast ferry that truly is of a new generation.”

The new ferry will enter commercial service on 1st June, 2017.

“Molslinjen offer up to 30 sailings per day and taking the ferry typically saves customers around 400km of driving while being faster and more relaxing,” says Vice Chairman Søren Jespersen. “Designed and optimized for our use Express 3 offers a fantastic onboard service for our customers. With the arrival of this fantastic craft our business transformation continues, expanding our route capacity, facilitating opening up new services and ensuring continued profitability growth for our company.”