JULY 23, 2012 — Norway’s Fjord Line has decided that two new cruise ferries will be fully LNG fueled rather than “dual fuel.”

The 170 m, 1,500 passenger, 600 vehicle ferries are being built in Norway by Bergen Group Fosen, with the hulls coming from Poland’s Stocznia Gdansk shipyard.

Today, Bergen Group Fosen reported that it has been awarded a supplementary contract for conversion of the ships to single-fuel LNG engine systems. LNG will then be the only fuel source for both vessels from the first day of operation.

The scope of work includes installation of what Bergen Group describes as “four modern and very environmentally friendly gas engines” in each of the two cruise ferries.

The contract involves change in delivery time for both ships. The first ship will now be delivered in April 2013. The second ship will be completed some months later.

Bergen Group CEO Terje Arnesen says the modification project will enable the two ships to be among the most environmentally friendly cruise ferries in the world.

“LNG represents a very exciting future as a fuel source for an increasing part of the maritime industry. This contract contributes to a strengthening of our expertise within this area in early stages of an existing market development,” he says. 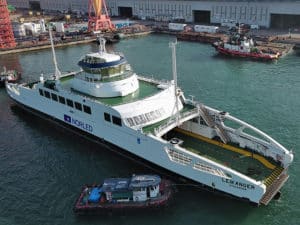