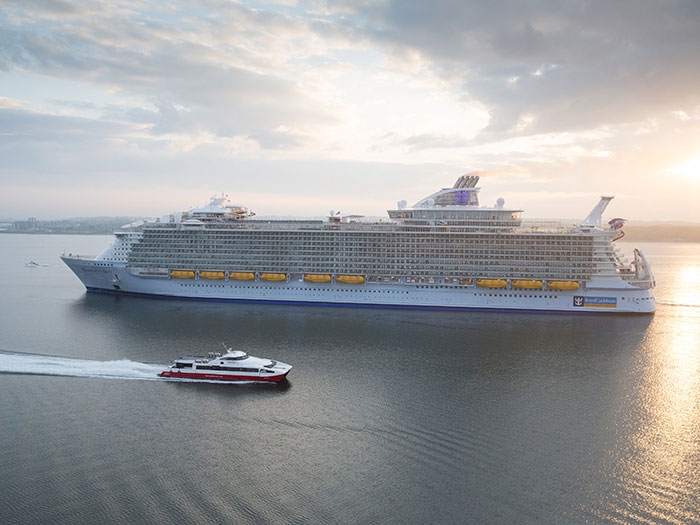 Harmony of the Seas arrives in Southampton

MAY 20, 2016 — Following delivery from shipbuilder STX France, the world’s largest cruise ship, Royal Caribbean’s Harmony of the Seas is now sailing from Southampton, U.K. on a series of short getaways to Northern Europe before embarking on her official maiden cruise on May 29, arriving in Barcelona, Spain on June 5.

With 18 decks, she has a passenger capacity of 5,497 guests at double occupancy (6,780 guests total) and has 2,100 crew members.The newest addition to the family combines the distinct seven-neighborhood concept that Royal Caribbean’s Oasis class of ships are known for with a lineup of the most modern and groundbreaking vacation amenities. Innovative features include The Ultimate Abyss, the tallest slide at sea with a 10-story plunge; robot bartenders at The Bionic Bar, powered by Makr Shakr; virtual balconies with real-time views of the destination and Voom – the fastest internet at sea – so that guests can stay connected, stream their favorite entertainment and share their adventures with family and friends back at home.

According to Royal Caribbean, the ship is built with more than 500,000 individual parts. Construction took more than 32 months, but a new video from the cruise line compresses the whole process, from steel cutting to arrival in Southampton, into less than a minute.