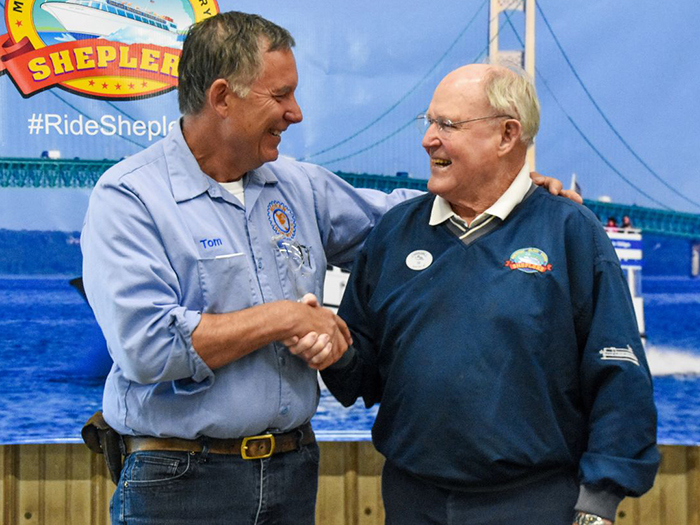 Bill Shepler, CEO of Shepler’s Mackinac Island Ferry, and Tom Moran, CEO and founder of Moran Iron Works, announced the project today at a news conference in Moran’s fabrication center, where Shepler cut the first piece of metal for the new ferry.

“Moran Iron Works is all in on fulfilling Shepler’s commitment to build in Michigan, by Michigan, for Michigan,” Moran said. “The work being done here will support 40 local families and result in one of the finest vessels plying the straits today.”

The $4 million state-of-the art vessel will serve Mackinac Island, which is located in Lake Huron between Michigan’s Upper and Lower Peninsulas. It is set to enter service in Summer 2020.

Designed by SeaCraft Design, Sturgeon Bay, Wis., the vessel will be the first fast ferry application of Hamilton Waterjets on the U.S. Great Lakes and the first application in the U.S. of its new Advanced Vessel Control System.

The new 210-passenger boat will be wheelchair accessible and have a large aft deck for luggage, bikes and strollers. It will also include enhanced air conditioning and heating capabilities to keep passengers comfortable in all weather.

Construction will require some 13,000 man hours on the shop floor over the next several months.

This fall the 60-ton ferry will be trailered to Moran Iron’s Port Calcite Collaborative, a deep-water port in nearby Rogers City.

The move will take place along a high-wire transport corridor running primarily along the M-68 highway.

It will then launch in Lake Huron and be sailed to Shepler’s facility in Mackinaw City, where it will be detailed in preparation for its inaugural run next summer.

Moran Iron Works has done routine repairs as well as extensive modifications on four Shepler’s vessels, and this is its second ferry build for the company. Traditionally, ferries are built in the shipyards of Wisconsin, the Atlantic seaboard or the Gulf Coast, but Moran Iron is changing that with its inland facility and high-wire corridor to Port Calcite.

“Shepler’s is always working to maintain its position as Michigan’s premier ferry service to the state’s premier tourist destination,” Shepler said. “This new boat is another downpayment on that commitment.”