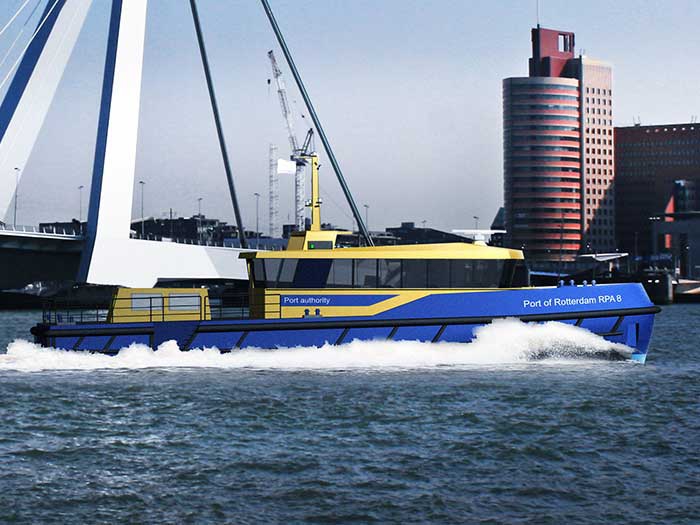 When putting out a tender for the patrol boat, the Port of Rotterdam Authority defined a number of principles, including the cost of ownership, emission reduction and minimizing of wave generation.

By correctly loading the engines, the RPA 8’s combustion is more efficient, which reduces fuel consumption and emissions.

An aftertreatment system further limits the emission of hazardous substances.

“In this contract, we wanted to show that it is possible to save fuel by effectively aligning the combination of diesel and electric power,” says Maarten Kooiman, Head of the Design Bureau at Kooiman Engineering. The shipyard also collaborated with the Van Oossanen group, which designed a hull specifically for the RPA 8.

The hull is a combination of two patented inventions: the Fast Displacement Hull Form and the Hull Vane. This minimizes wave generation and results in a 20% reduction in vessel resistance at top speed. To reach the desired top speed (35km/h), 736 kW is sufficient power.

“This allows us to install smaller main engines,” says Maarten Kooiman. “The information gained from various engine suppliers showed that MAN Rollo could supply engines in the required power range and at a low lifecycle cost.”

The Port of Rotterdam Authority is striving to become a sustainable port. “Our engines are in keeping with this,” says Karel Schuurman, Sales Manager at MAN Rollo. “The engines are very modern and feature the latest common rail fuel injection technology. As a result, their fuel consumption is low and the exhaust emission levels are lower than that prescribed by the current global emission standards.”

This is a major advantage, because the patrol boat will operate in a busy urban area with a lot of waterborne traffic. The two MAN D2676LE424 engines supplied by MAN Rollo each generate 382 [email protected],800 rpm and, says Mr. Kooiman, are “the best option for the RPA 8 with respect to dimensions and weight.”

MAN Rollo Rollo is part of the international trading and service organisation Pon, one the largest family-owned businesses of the Netherlands.