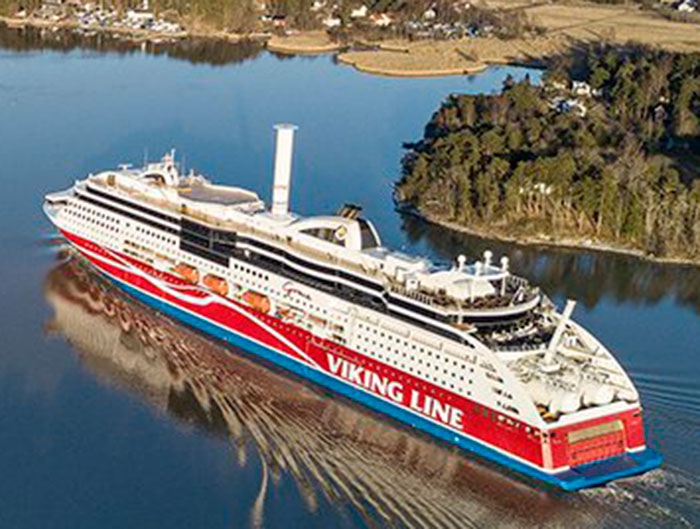 APRIL 30, 2018 — Classification society Lloyd’s Register (LR) says that installation of a rotor sail on the LNG-fueled ferry Viking Grace (see earlier story) was carried out with LR approval of the structure and the risk-assessment related to the installation of the sail in line with its Guidance Notes for Flettner Rotor Approval. The approvals were conducted to ensure that the rotor would not adversely affect the safe operation of the ship or the safety of the crew.

The rotor sail, developed by Finnish company Norsepower Oy Ltd, is expected to cut fuel consumption and reduce emissions (by up to 900 tonnes CO2 annually). Viking Grace is already operating on wind assisted voyages between Turku, Finland and Stockholm, Sweden. The LNG-fueled ferry has been in operation since 2013 when LR helped Viking Line handle the complexities of the LNG tanks on the stern deck as well as its regulatory, class and operational requirements.

The rotor sail installed on Viking Grace is 24m in height and 4m in diameter and uses the Magnus effect for propulsion. As the rotor is spinning, the passing air will flow with a lower pressure on one side than the opposite side. The propulsion force created by this pressure difference drives the vessel forward. The rotor sail operation is automated and the system will shut down in response to any disadvantageous changes in the direction or force of the wind.

“The use of wind power reflects Viking Line’s green values and we want to pioneer the use of solutions that reduce impact on the environment. Based in Finland, Norsepower has developed a world-class mechanical rotor sail solution that will reduce fuel consumption. We are proud of the fact that Viking Grace will be the first passenger ship in the world to benefit from this innovative solution,” said Jan Hanses, CEO of Viking Line.

LR’s Jane Jenkins, Lead Specialist, Passenger Ship Support Center, commented: “A few years ago LR developed an animation called ‘The Ferry – a story of innovation’, which at one point shows a ferry with wind rotors and kite sails sailing across the screen at breakneck speed. At the time rotor sail technology was clear but not immediately contemplated in the context of a ferry. It is wonderful to see what seemed like an idea at the time become a reality. We are immensely proud to have been part of the journey.”

In addition to the installation onboard the Viking Grace, Viking Line will also install two Norsepower rotor sails onboard a newbuild cruise ferry vessel which is currently being built by China’s Xiamen Shipbuilding and which is due to be operational in 2020.