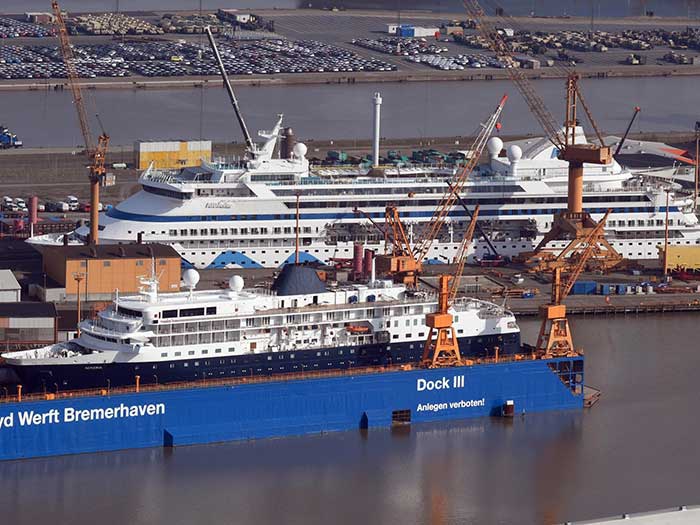 JUNE 20, 2017 — Work on four cruise ships has kept Germany’s Lloyd Werft Bremerhaven GmbH, now owned by Malaysian-based Genting Group, busy in the past few months as it gears up for a number of future projects.

AIDA Cruises’ 203 m, 2012-built AIDAvita, led the way, drydocking at the end of March for the first time in the shipyard’s big Kaiserdock II for ten days.

In addition to routine technical classification and maintenance work, numerous jobs needed completing in the vessel’s public areas, many of which were renovated by AIDA Cruises itself, with Lloyd Werft personnel on hand here to provide technical support.

During AIDAvita’s time in dry dock, jobs included new coating — a task that required about 9,000 liters of paint. The ship’s bow thrusters and both propeller drives were inspected as were her side-mounted hull stabilizers. The ship’s davits were inspected while the lifeboats themselves underwent servicing at the Fassmer Shipyard in Berne at the same time.

Built at the Mariotti Shipyard in Genoa in 1996, Minerva has a capacity of 350 passengers in 198 cabins and has served under the charter name Alexander von Humboldt for Phoenix Seereisen. She is not a newcomer to Lloyd Werft: five years ago the yard installed an additional deck with a lounge on the ship, built in new suites and added balconies to more of her cabins. To reduce fuel consumption the yard also installed a Promas system from Rolls Royce to optimize below surface water flow.

Another familiar visitor in April was the expedition cruise ship National Geographic Explorer, which was paying her fifth docking visit to Bremerhaven. The 112 m long ship, owned by Lindblad Expeditions Inc., arrived straight after a voyage of several weeks in the Antarctic for routine maintenance and class work. Lloyd Werft personne carried out the work in the Floating Dock VI of neighboring German Dry Docks (GDD) in Bremerhaven’s Kaiserhafen 1.

Another ship operating away from the usual routes plied by the major cruise lines is the 144 m, 350 guest Hamburg, operated by Bremen headquarters Plantours Kreuzfahrten in Bremen.

On completion of a western Europe cruise, after discharging about 350 guests at the Columbus Cruise Center on April 26, she headed straight into dock for maintenance and class work. This job was also carried out by specialists from Lloyd Werft.in Floating Dock 5 at German Dry Docks.

After her yard stay, she headed for Hamburg where her next cruise began from the Hafencity Cruise Terminal on May 10th.

Since being acquired by Genting Group in 2015, Lloyd Werrft has alos specialized in the building and conversion of yachts and special prototype vessels as well as in the conversion of cruise ships.

The yard no longer carries out repair work on for cargoships, though its docks are regularly utilized by German Dry Docks for work on these ship types.

“With our trim and powerful team we are well placed to tackle upcoming projects,” says the Lloyd Werft management.

One such project has been another docking of Germany’s biggest research ship “Polarstern” operated by the Alfred Wegener Institute for Polar and Marine Research. The ship’s latest overhaul at the yard, which lasted until May 24, marked her 66th drydocking for work by Lloyd Werft’s team since the research ship was built in 1982.

Lloyd Werft is now continuing preparations for upcoming late Summer projects. As well as a second big yard stay for Polarstern in Autumn, Crystal Cruises’ Crystal Symphony is expected in the yard for conversion work between mid September and October 20 that will include adding two new restaurants, installing the technical prerequisites for the introduction of free WLAN and expanding the size of some of the ship’s luxury penthouse suites, reducing the passenger capacity to 848.

Intensive preparations are already underway at the yard for a contract to build a new yacht, work on which will start at the beginning of 2018 in Floating Dock III. This newbuilding, for delivery in 2020 to an unidentified customer, will ensure a good workload at the yard.

Lloyd Werft’s Design Center also reports a consistently full work load. Its approximately 70 employees are busy both with design work connected to the new yacht newbuilding contract. and with production of wide-ranging design documentation for other yacht newbuilding projects and special ships.