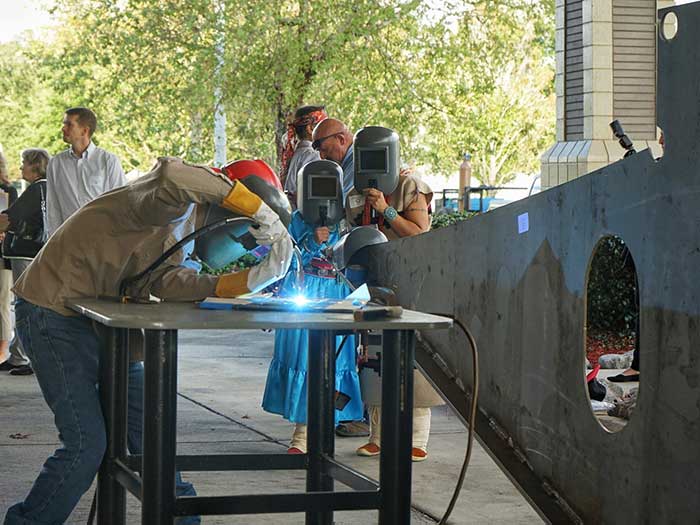 Gulf Island Shipyard held a keel laying ceremony on Oct. 30 for the future USNS Navajo (T-ATS 6), the lead ship of the Navy’s new class of Towing, Salvage, and Rescue vessels. The ceremony was held at the Houma Terrebonne Civic Center in Houma, La.

“We are honored to have so many members of Navajo Nation in attendance to celebrate this early milestone in the shipbuilding process,” said Mike Kosar, support ships, boats and craft program manager, at the Navy’s Program Executive Office Ships. “These ships are critical to the operations of our fleet, and will soon sail with the resilience and determination of the Navajo people of which they honor.”

The Navajo-class will provide ocean-going tug, salvage, and rescue capabilities to support fleet operations. The current capabilities are provided by three T-ATF 166 and two T-ARS 50 class ships, which reach the end of their expected service lives starting in 2020.

Navajo-class ships will be capable of towing U.S. Navy ships and will have 6,000 square feet of deck space for embarked systems. The platform will be 263 feet long, have a beam of 59 feet, and can carry a load of 1,796 tons.

In addition to T-ATS 6, Gulf Island Shipyard is under contract for the detail design and construction of the future USNS Cherokee Nation (T-ATS 7) and USNS Saginaw Ojibwe Anishinabek (T-ATS 8).