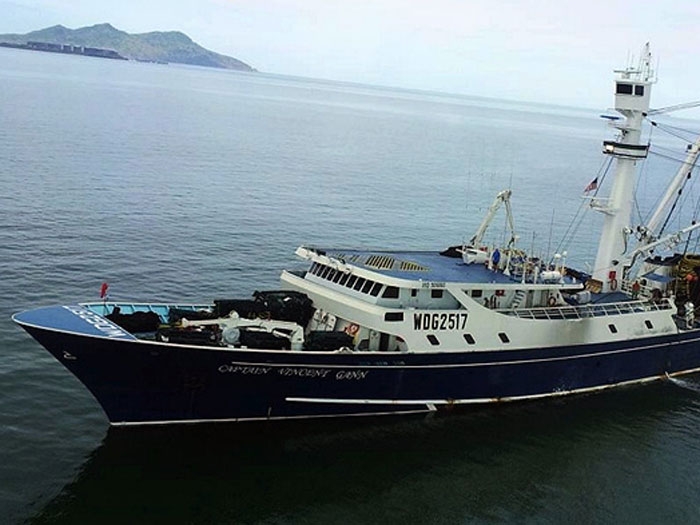 They will also perform fleet-wide inspections and other corrective measures to resolve claims stemming from an October 2014 oil spill in American Samoa and related violations of spill prevention regulations, according to the Department of Justice and the Coast Guard.

In its complaint, filed this week along with the lodging of a consent decree in the U.S. District Court for the District of Hawaii, the United States alleges that the companies —Tri-Marine Management Co., Tri-Marine Fishing Management and Cape Mendocino Fishing (Tri-Marine)— are liable for the October 2014 oil spill from their 230-ft commercial tuna fishing vessel, the Capt. Vincent Gann, into Pago Pago Harbor in American Samoa and related violations of the Coast Guard's spill prevention regulations.

After the Capt. Vincent Gann returned to Pago Pago Harbor from a two-month fishing voyage, it struck two moored fishing vessels while maneuvering in the harbor on Oct. 16, 2014. The hull of the Capt. Vincent Gann was breached during the crash and at least 35 barrels of marine fuel oil flowed out of the bulbous bow into the water.

It is illegal to store fuel in the bulbous bow.

The complaint further alleges the illegal oil storage was done to extend the duration of the fishing voyage and allow storage of a larger catch of fish. The extra fuel oil had been stored in two of the fish holds, but the oil was transferred out of the fish holds to the bulbous bow to make room for storage of tuna in those fish holds.

The complaint also alleges the vessel was equipped with unlawful piping configurations that tied the bilge water system into the fuel system and that the extra fuel originally was loaded into the vessel using an unauthorized method of pumping fuel oil with hoses over the top of the deck into open fish holds.

In addition to payment of the civil penalties, the consent decree requires Tri-Marine to perform inspections and corrective measures across its entire fleet of ten American Samoa-based vessels, including a top-to-bottom review and overhaul of all of the vessels' oil handling practices, operator certifications, independent audits, increased reporting, and the engagement of a full-time consultant or in-house personnel focused on environmental and maritime compliance.

"This settlement sends a clear message to vessel owners and operators that they cannot put profits ahead of protection of the marine environment or compliance with the law," said Assistant Attorney General John C. Cruden, for the Justice Department's Environment and Natural Resources Division. "Tri-Marine will pay a significant penalty and conduct meaningful fleet-wide corrective measures for its release of oil into Pago Pago Harbor, a sensitive and valuable marine environment. We are grateful to our partner at the U.S. Coast Guard for their swift and diligent investigation of these violations."

"Storage of oil in the bulbous bow has long been prohibited and poses obvious and serious risks to a vessel's crew and the marine environment," said Captain Shannon Gilreath, Sector Commander of the Coast Guard's Sector Honolulu, which covers both American Samoa and Hawaii. "This enforcement action reinforces this point and emphasizes safety and pollution prevention measures within this fleet of vessels."

Section 311(b) of the Clean Water Act makes it unlawful to discharge oil or hazardous substances into or upon the navigable waters of the United States or adjoining shorelines in quantities that may be harmful to the environment or public health. In addition, the Coast Guard has promulgated spill prevention regulations for vessels and other facilities under Section 311(j) of the Act. The penalty paid for this spill and the related spill prevention violations will be deposited in the federal Oil Spill Liability Trust Fund managed by the National Pollution Fund Center. The Oil Spill Liability Trust Fund is used to pay for federal response activities and to compensate for damages when there is a discharge or substantial threat of discharge of oil or hazardous substances to waters of the United States or adjoining shorelines.

The proposed consent decree, lodged in the District of Hawaii, is subject to a 30-day public comment period and court review and approval. A copy of the consent decree is available HERE

OCTOBER 30, 2015 — Following a pollution incident that saw a tuna boat spill fuel oil that had been stored in its bulbous bow, three Tri-Marine tuna fishing companies have agreed to pay $1.05 million in civil penalties.