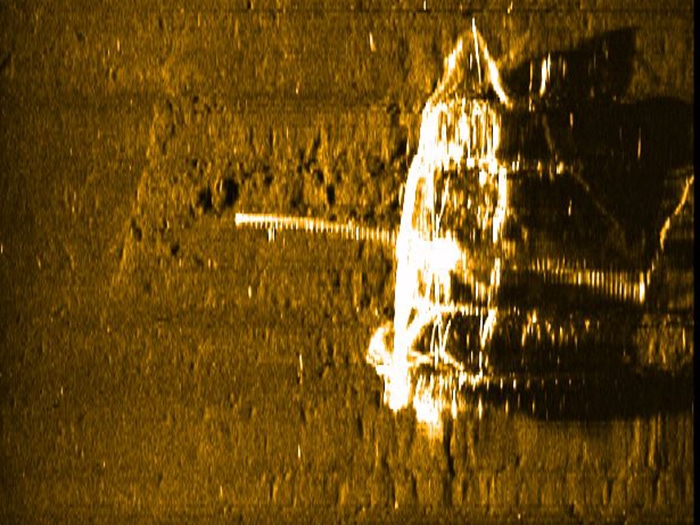 Sidescan sonar imagery from May 19, 2021 shows Emmy Rose on sea bottom after sinking to a depth of 794 feet. [Image: NTSB/MIND Technologies]

The National Transportation Safety Board (NTSB) has released its report on the November 17, 2020, sinking of the 82-foot commercial fishing vessel Emmy Rose. All four aboard—the captain and three deckhands—lost their lives.

As it has previously, the NTSB reiterated an earlier safety recommendation to the Coast Guard to require all vessel personnel be provided with a personal locator beacon (PLB).

“It shouldn’t take three marine tragedies to recognize the vital importance of personal locator beacons,” said NTSB Chair Jennifer Homendy. “Given their wide availability and relatively low cost, I urge all fishing vessel operators to provide crewmembers with PLBs today—don’t wait for a mandate from the Coast Guard. If the Emmy Rose crew had access to these devices, perhaps some of them would still be with us today.”

The following is from the executive summary of the report:

On November 17, 2020, after departing Portland, Maine, the four crewmembers aboard the 82-foot-long commercial fishing vessel Emmy Rose fished for five days in the Gulf of Maine. On November 22, the captain notified a seafood distribution facility in Gloucester, Mass., that they had about 45,000 pounds of assorted fish to offload and expected to arrive at 0600 the following morning. The crew fished for another four hours, departing about 1830 for Gloucester.

At 0129 on November 23, the U.S. Coast Guard in Boston, Mass., received a distress signal from the emergency position indicating radio beacon (EPIRB) registered to the Emmy Rose. There were no distress calls from the vessel before the EPIRB signal. The vessel had traveled about 45 miles to the west over the 7 hours since departing the fishing grounds. Weather conditions recorded by a nearby buoy (about 21 miles from the sinking site) at the time of the EPIRB signal were winds from the east-southeast at 17 knots, gusting to 21 knots, and the sea state was 5.6 feet observed with an easterly sea swell of 5-6 feet.

Coast Guard search and rescue assets were deployed to the area of the EPIRB signal, about 27 miles from Provincetown, Mass. Search and rescue efforts continued for 38 hours and covered over 2,200 square miles. During the search, Coast Guard personnel recovered the EPIRB, the liferaft, one life ring, and two wooden fish hold hatch covers from the Emmy Rose. None of the crewmembers were located as of the date of this report, and they are presumed dead. The vessel sank in 794 feet of water and was not recovered. Its estimated value was $325,000.

At the time of the sinking, the Emmy Rose likely did not meet regulatory stability criteria, which meant that the vessel had a smaller margin of safety than intended by regulations and was more susceptible to capsizing.

The vessel’s lazarette hatch had a non-watertight cover that had no securing mechanism, which meant the Emmy Rose was not being operated in accordance with its stability instructions and fishing vessel regulations, and water likely began flooding the vessel through the hatch that was likely opened by the sloshing seawater on the stern.

Because of the water on deck and downflooding through the lazarette and fish hold hatches, the vessel likely experienced a sudden capsizing.

Similarly, NTSB found that the inclusion of an examination of hatch securing mechanisms during safety examinations would increase the safety of commercial fishing vessels by ensuring that a vessel maintains watertight integrity and is able to comply with its stability instructions.

NTSB determined that the probable cause of the sinking of the fishing vessel Emmy Rose was a sudden loss of stability (capsizing) caused by water collecting on the aft deck and subsequently flooding the vessel through deck hatches, which had covers that could not be secured, contrary to the vessel’s stability instructions and commercial fishing vessel regulations.

As a result of this investigation, NTSB recommended that the Coast Guard increase the scope of commercial fishing vessel safety examinations to include inspections of freeing port covers and hatch covers. Additionally, NTSB reiterated Safety Recommendation M-17-45 to the Coast Guard to require personal locator beacons for personnel employed on vessels in coastal, Great Lakes, and ocean service to enhance their chances of survival.

There is, of course, far more detailed information in the full NTSB report. Download it HERE.