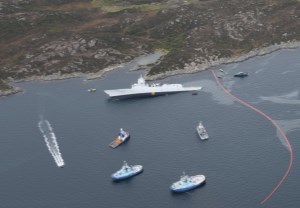 DECEMBER 3, 2018 — Investigators probing the November 8 incident that led to the sinking of the Norwegian frigate KNM Helge Ingstad following a collision with the tanker Sola TS have identified safety-critical issues related to the frigate’s watertight compartments that require immediate attention.

The Accident Investigation Board Norway (AIBN) says that it must be assumed that the issues also apply to Norway’s four other Nansen-class frigates and that “it cannot be excluded that the same applies to vessels of a similar design delivered by Navantia, or that the design concept continues to be used for similar vessel models.”

The Nansen class frigates are based on Spanish shipbuilder Navantia’s Álvaro de Bazán-class F100 frigate, which has also served as the basis for Australia’s Hobart class destroyer and is the parent craft of one design in contention for the U.S. Navy’s FFG (X) program.

The AIBN says it assumes that its findings are not in conformity with the required damage stability standard for the Nansen-class frigates.

“To start with,” says AIBN, “flooding occurred in three watertight compartments on board KNM Helge Ingstad: the aft generator room, the orlop deck’s crew quarters and the stores room. There was some uncertainty as to whether the steering engine room, the aftmost compartment, was also filling up with water. Based on this damage, the crew, supported by the vessel’s stability documents, assessed the vessel as having ‘poor stability’ status, but that it could be kept afloat. If more compartments were flooded, the status would be assessed as ‘vessel lost’ on account of further loss of stability.

“Next, the crew found that water from the aft generator room was running into the gear room via the hollow propeller shafts and that the gear room was filling up fast. From the gear room, the water then ran into and was flooding the aft and fore engine rooms via the stuffing boxes in the bulkheads. This meant that the flooding became substantially more extensive than indicated by the original damage. Based on the flooding of the gear room, it was decided to prepare for evacuation.”

The AIBN has issued the following two recommendations:

The Accident Investigation Board Norway recommends that Navantia, the vessel’s designer, conduct investigations into the issues identified during this initial investigation and to ascertain whether this is also an issue relating to other vessels. Furthermore, that Navantia issue a notification to relevant shipbuilding yards, owners and operators, advising on necessary measures to address safety.

You can download the AIBN preliminary report on the collision HERE

One Response to “Investigators: Safety-critical concerns with F100 frigate design”

[…] The frigate sank following a November 8, 2018, collision with the tanker Sola TS. Subsequently investigators from Accident Investigation Board Norway identified safety-critical issues related to the frigate’s watertight compartments that, it said, raised doubts about Norway’s four other Nansen-class frigates and other vessels based on Spanish shipbuilder Navantia’s F100 design (see earlier story). […]