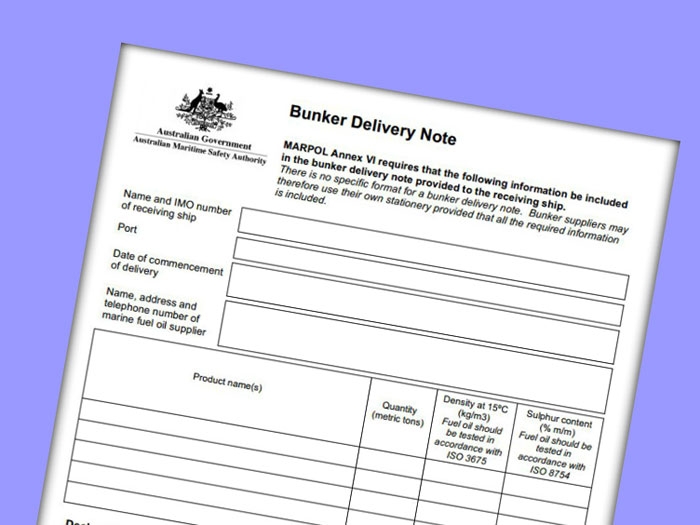 OCTOBER 22, 2014 — Here’s another example of how changes to regulations mean changes in the reams of paperwork confronting the marine industry. The text of the supplier’s declaration required on the bunker delivery note (BDN) under MARPOL Annex VI is likely to be amended, says the London headquartered IMarEST (Institute of Marine Engineering, Science and Technology).

To reflect situations where the fuel buyer will be using abatement technology, or scrubbers, to meet sulfur emission regulations, a proposal to add text to the BDN was put to the just concluded 67th meeting IMO’s Marine Environment Protection Committee (MEPC 67).

A submission from a large number of countries and the European Commissions said that in order to allow for situations where technology, rather than fuel, would be used to meet sulfur limits, new text should be added.

The only comment raised in plenary on Thursday was from IMarEST. It suggested that instead of adding text, the supplier’s declaration should be rewritten to “reflect the reality of the situation” more fully by omitting reference to regulation 14.1 or 14.4 (which relate to sulfur limits) in all cases.

It was put forward on behalf of IMarEST by Andy Wright, who works for Lloyd’s Register FOBAS.He made the point that suppliers have no control over how fuels they provide are actually used onboard a ship.

The proposed new text for the BDN requirement was: “A declaration signed and certified by the fuel oil supplier’s representative that the sulfur content of the fuel oil supplied is in accordance with the value stated on this Bunker Delivery Note and the fuel oil is in conformity with regulation 18.3 of MARPOL Annex VI”.

The intervention by IMarEST was based on the recommendations made in a review of MARPOL Annex VI, recently published by the International Council on Combustion Engines (CIMAC), which identified “an inherent problem” in the supplier’s declaration text required on the BDN.

There were no objections to the proposal as the need for change was recognised, and MEPC 67 agreed that it should go forward to the Sub-Committee on Pollution Prevention and Response (PPR) to draft new text regarding the supplier’s declaration on the BDN for MEPC to consider.

IMarEST was invited to come to the PPR committee to help formulate new text, as its alternative text appeared to be well received.

PPR is scheduled to meet in January 2015. If the January PPR session manages to agree on new text, this could be put forward to MEPC 68 in May next year for approval.

The matter has become urgent because a number of ship operators intend to meet the 0.10% sulfur limit in emission control areas that takes effect in 2015 by using scrubbers.