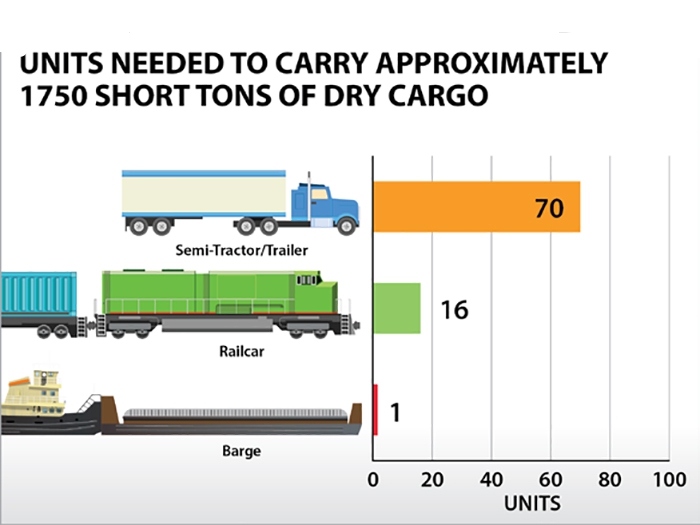 MARCH 30, 2017 — Not only are barges the most fuel efficient of all major modes of freight transportation, but that efficiency is improving. An update to a long-running study shows that barges can move a ton of cargo 647 miles with a single gallon of fuel, up from 616 miles five years ago.

That emerges from a just released of National Waterways Foundation (NWF)-commissioned update of a national study comparing selected societal, environmental, and safety impacts of utilizing inland river barge transportation to highway and rail transportation has been released.

Titled, “A Modal Comparison of Domestic Freight Transportation Effects on the General Public: 2001–2014 (January 2017),” the study was conducted by the Texas Transportation Institute’s Center for Port and Waterways at Texas A&M University. This study was originally conducted and peer reviewed in 2009, and then updated in 2014 and again in 2017, when five-year data sets were available.

compares cargo capacity of trucks, trains and inland river barges. One common 15-barge river tow has the same capacity as 1,050 trucks and 216 rail cars pulled by six locomotives. To fully appreciate the carrying capacity of a barge, the study notes that a loaded, covered hopper barge transporting wheat carries enough product to make almost 2.5 million loaves of bread, or the equivalent of one loaf of bread for almost every person in the state of Kansas. A loaded tank barge transporting gasoline carries enough product to satisfy the current annual gasoline demand of approximately 2,500 people.

addresses the amount of cargo currently transported on major rivers and finds that it is equivalent to more than 49 million truck trips annually that would have to travel on the nation’s roadways in lieu of water transportation. The hypothetical diversion of current waterway freight traffic to the nation’s highways would add 1,046 combination trucks to the current 875 trucks per day, per lane on a typical rural interstate. The percentage of combination trucks in the average annual daily traffic on rural interstates would rise 14%, from the current 17% to 31%.

determines that, after adjusting for differences in cargo quantity moved by each mode, for each member of the public injured in a barge accident, 80.44 are injured in rail accidents and 824 are injured in truck accidents. For fatalities, there are 79 trucking deaths and 21.9 rail deaths for one barge related death. The data for this study on trucking injuries and fatalities varies greatly from previous iterations of this study because the government has changed the way it calculates ton-miles, now examining accidents or fatalities over more ton-miles than previously calculated.

notes the rate of spills of more than 1,000 gallons are very low for barges, at 2.12 gallons per-million-ton-miles, rail at 5.95 and trucks at 6.04. The data shows that the inland towing mode is significantly improving.

highlights the significant infrastructure impacts if waterborne freight were diverted to highways. Approximately two inches of asphalt would have to be added to the pavement of 118,688 lane-miles of rural interstate given the higher levels of expected 20-year truck loadings, assuming an even truck traffic distribution over the national highway system. Other infrastructure improvements would be required such as bridges, ramps, highway geometric features like horizontal and vertical curves and shoulders, truck stops, service stations, rest areas, weigh stations, and traffic control. In addition, routine maintenance costs associated with the new infrastructure as well as with the existing, which would be used more heavily, would likely be significantly higher.

Illustrates higher than national average statistics on concentrations of additional truck traffic on highway corridors parallel to major rivers if freight were to be diverted from river to road.

“While we live in a truly intermodal society, this study’s comparison of rail, truck and inland waterways transportation modes underscores the many benefits of moving cargo by water,” said Daniel Mecklenborg, Chairman of the National Waterways Foundation.

The mission of the National Waterways Foundation is to develop the intellectual and factual arguments for an efficient, well-funded and secure inland waterways system.