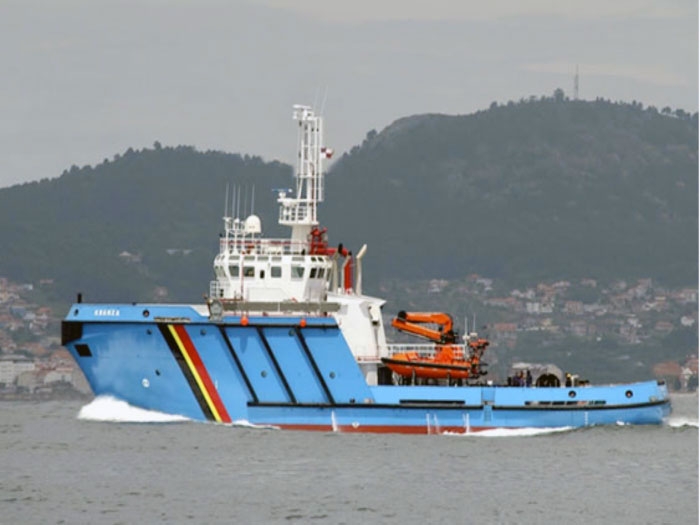 Francisco Cardama designed, engineering and built the Kwanza as part of a series of three sister vessels. The Kwanza has an overall length of 44 meters, beams of 12.2 meters, depth of 6.05 meters, and draft of 5.15 meters. The tugs are classed by Lloyd’s Register as +100 A1 + LMC Tug/FiFi 1; Oil Recovery and are design for tug, rescue, firefighting, and pollution control. The sister vessels in the series are the Chiloango and Giraul.

Propulsion for the Kwanza is supplied by two Caterpillar 3516C engines, rated at 3,728 kW that drive two 2.7 meter diameter fixed-pitch propellers. The tug had a sea trial speed of more than 15 knots.

Meanwhile, Fluidmecanica says the towing winch has a cable capacity of 800 meters (Ø50.3 mm), with a drum belt keeping force of 130 tons, a speed of 0-14 meters per minute, and a first layer pull of 25 tons. The prime movers for the winch are two hydraulic motors from Poclain Hydraulics with high torque, low revolutions, directly coupled to shaft.

For pollution control operations, the Kwanza is outfitted with 300 meters boom and reel, two skimmers with a capacity of 600 tons per hour each, and six portable tanks.