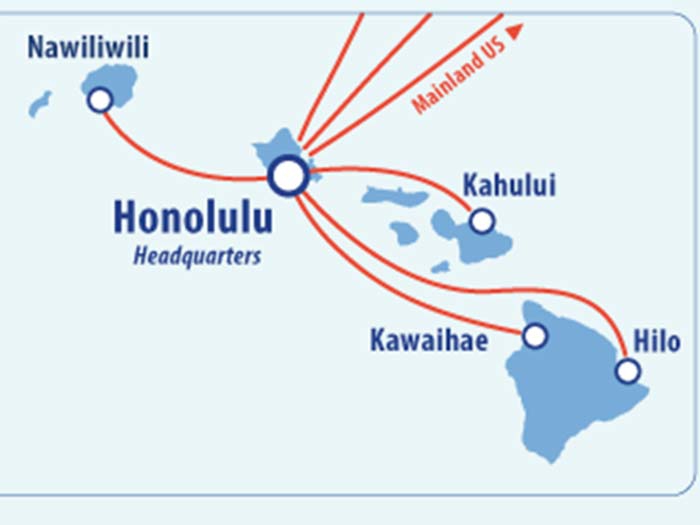 Matson's schedules extend to each of the major ports of Hawaii's Neighbor Islands: Kahului, Maui; Nawiliwili, Kauai; and Hilo and Kawaihae on the Big Island of Hawaii. Service is also available to the islands of Molokai and Lanai

The container barge Columbia, to be renamed Mauna Loa in honor of the barge it replaces, is now Matson’s largest barge. At 360 feet long, with a beam (width) of 100 feet and cargo carrying capacity of 12,600 tons or 500 TEU, it is 12 feet longer and 40 feet wider than the barge it replaces, with the capacity to carry 180 more TEU or nearly 8,000 tons more cargo.

Built in 2012 by the Gunderson Marine shipyard and classified as a deck cargo barge with approximately 33,000 square feet of deck cargo space, the vessel’s design enables swifter and more fuel efficient transits. Its deck is unobstructed to allow greater flexibility in loading containers and over-dimensional cargo and is protected by a large breakwater at the bow and bin walls on the sides to aid in cargo securing and protection from the marine environment.

Matson’s barge upgrade comes at a time of heavy investment in its Hawaii service. The company recently announced the purchase of three new gantry cranes and the upgrade of three existing cranes as part of a $60 million project to expand and improve its Sand Island terminal in Honolulu Harbor in preparation for the arrival of the first of four new, larger containerships starting next year.

Matson has two Aloha Class ships under construction at Philly Shipyard in Philadelphia with deliveries scheduled for the third quarter of 2018 and first quarter of 2019, respectively. The 850-foot long, 3,600 TEU vessels will be Matson’s largest ships and the largest containerships ever built in the U.S. They will also be faster than any of Matson’s current vessels, designed to operate at speeds in excess of 23 knots, helping ensure timely delivery of goods in Hawaii.

Matson has also ordered two Kanaloa Class vessels from General Dynamics NASSCO in San Diego with deliveries scheduled for the fourth quarter of 2019 and second quarter of 2020 respectively. These ships will be combination container and roll-on/roll-off (“Con-Ro”) vessels built on a 3,500 TEU vessel platform 870 feet long and 114 feet wide, with enclosed garage space for up to 800 vehicles.

With delivery of the Kanaloa Class ships, along with its two new Aloha Class ships, Matson will have completed the renewal of its Hawaii fleet.

Matson’s latest investments in terminal improvements are a cornerstone of the State of Hawaii’s Harbor Modernization Plan, which includes the reinforcement of berths in Honolulu Harbor to support the expansion of Matson’s Sand Island Terminal.

“These investments in our Hawaii infrastructure underscore Matson’s long-standing commitment to serving our communities with the most reliable, efficient and environmentally friendly operations in the islands for the long-term,” said Matt Cox, chairman and chief executive officer.